The Quest   By Dani Hoots 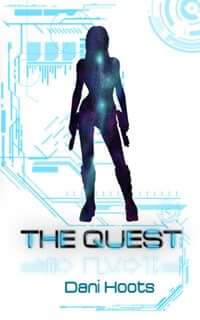 Eleven years ago, my life was ripped away from me. My father, my brother, my humanity. Everything. I was thrown into the Kamps, created to be a mindless killing machine. But I fought against it, not letting them take away my memories of the past.
And I succeeded.
It has been seven years since I was taken out of the Kamps and made into the Emperor’s Shadow. Now I only take orders from him, and him alone, without question. That is, until my brother, who I thought was dead, shows up and kidnaps me in order to help him find some long lost planet that our father used to tell stories about.
According to the legend, any who finds the planet SanshIl can rewrite the past, and my brother wants to use it to destroy the Emperor. What if this planet is real? And the longer I stay with my brother, the more I begin to find that the Emperor has been keeping secrets from me. But I can’t turn my back on him…
Or can I?

You can buy Dani Hoots The Quest at:
http://myBook.to/DaniHootsTheQuest

Dani Hoots is an author, artist, creator, environmental activist, apothecary, and so much more. If she’s not working on one of those things, she is probably picking up another hobby.
She loves writing in all different genres, including sci-fi, fantasy, yound adult, horror and romance. Her previous works include “A Falling Starr” and “A World of Vampires.”
Her newest novel coming out in April is a scifi young adult novel called “The Quest.”
Dani Hoots is also currently in Your Novel Year program at Arizona State University, has a Masters of Urban and Environmental Planning, and lives with her awesome husband and two cats in Seattle.

It’s time to put your feet up, turn on your kindle, or quite literally open up to the first page of an extremely exciting read that you will futilely try to the best of your ability to put the book down. But I will tell you, it’s an extreme impossibility, and it’s a feat that only the most determined reader would have to do. Just as an aside, I have served as an editor for approximately six or so of Dani Hoot’s published short stories, fittingly called A World of the Vampires. Nonetheless, I always try to read without my acknowledged biases about Dani Hoot’s writing. Yet it is an interesting place to be, reviewing her first published full-length novel, as someone that has spent tons of hours, carefully scrutinizing her lines of prose for any glaring grammatical errors, problems with sentence construction etc. Invariably, I am always on the edge-of-my-seat, whenever I am editing her stories because they are always well-paced, and written with a sharp control over her wording and prose. It is measured, it is succinct, it is never bloated, overwritten, verbose, meaning it never snags on any terribly dull moments. This is what keeps readers turning pages rapidly.

Her descriptions may sometimes appear minimalist, and sometimes, certain elements of her stories seem to feel hackneyed at times, but only when you’re really beginning her stories. If you are a seasoned science fiction reader, or avid watcher of space opera shows like Battlestar Galatica, Farscape, and Firefly,you’re bound to notice certain familiar tropes. It is an inescapable reality, but within The Quest, Dani Hoots does a great job trying to reinvent around the tropes, sculpting her own story, while also paying slight homage to these stellar  examples of great science fiction stories. There are a cast of eccentric, colorful characters, a shrewd, spunky  lead female character with a tormented past, an accomplice in some of her missions, Jack, who has his own idiosyncratic love for clocks (almost a slight, clever nod to the thematic force of time, and its ramifications for the story’s deeper themes). There is a richly developed brother/sister relationship, which is reminiscent of Luke/Leia from the Star War Films.  Moreover, there is an empire, along with a band of brave rebels, unwilling to cow to the muscular empire’s demands, which again brings the classic Star Wars films to mind. These things aren’t just merely recycled, though, they are tropes wisely worked into Dani Hoot’s own vividly conceived scifi world.

For anime fans, the whole space opera genre can be summed up with the following fondly remembered show:

But again, it is the characters, the enigmatic force of “fate” that really underpins this story and helps the story avoid any stale trappings that could have toppled this layer cake of a story of rich excitement, clever bantering characters, and well-executed action sequences. There are a few minor problems with the story, in that some of the subplots were not as developed as well as I had wished, and a few of the minor characters, including Amanda and a few others from the beginning of the story, were uninteresting or lacked any substantial development to really make her and a few other characters stand out, but Jack, David, and of course, Arcadia- the lead female character with snark galore- strongly lead the story with mostly interesting, dynamic characters who are the true strong forces of an otherwise exciting, fun story that will again be very difficult to put down.

Also, I couldn’t help myself. Nostalgia proved to be too infectious, while reading this story:

As you can tell, besides some problematic development with a few subplots, these shortcomings are not enough to detract overall from a story that is chock full of very fast-paced, suspenseful action sequences and humorous, relatable characters. I breathlessly finished this book, while on the train, and only felt the sinking feeling of regret that the wonderful world that Dani Hoots creates with this novel will not resume existing truly in my life, till the next book is released later this year.

Indulgent Description of the Blend From the Canister:

This particular blend of Green Tea, from Tea Forte, doesn’t necessarily contain any spearmint leaves in it, but the organic peppermint in this specific Tea Forte blend, appropriately named “Green Mango Peach,” does hold a sharp minty aroma that carries an almost nourishing aspect to it  that reminds one of home or some notable haven of peace. Hence, that is the reason I included the GIF image above of Hermione Granger, in the film adaptation of Harry Potter and the Half Blood Prince, taking a heady whiff of a potion that carries the relaxing scent of spearmint toothpaste, at least that’s the scent Hermione picks up.  And that kind of smell or anything that deals with one of our five senses sometimes has the capacity to remind us of a significant event or long-forgotten/ repressed emotional trauma from the past.

For Arcadia in The Quest, seeing certain people or finding, then studying different objects, carry with them very strong reminders of a deeper quest that lies at the heart of the purpose of her supposed linear life, structured more over duties of fealty to certain key rulers. She often forgets her own autonomy and resourcefulness, when under the strong influential power of the Emperor of the galaxy’s largest, continually expanding empire.

While this tea does not necessarily relate to anything literal or concrete, in terms of the novel’s meaning. Its ability to unlock repressed memories, or cause us to feel a heavy, encumbering weight lift off our shoulders, when in the midst of frustrating, stressful scenarios. This is that same ability that certain individuals or objects in Arcadia’s life has that helps her focus on what truly is pivotal to her life quest, or something she is not necessarily certain she is fated to acted upon. The question of fate, and the meaning of stories and myths, in a future scheme of time plays a very important role in this novel. Like the character of Jack, with his eccentric love of time, sometimes we are negligent of the strange tight pattern that seems subtly woven into our lives. Great tea, like Tea Forte’s Green Mango Tea, like a certain potion from the sixth Harry Potter book, has that sneaky ability to completely suppress the overarching sense of time moving forward, as we are forced to ponder the strange predestined events of our lives.

Broadly speaking, this tea is  pretty much a fantastic fruit-flavored tea with a sharp minty undertone that makes it perfect for drinking after toiling out under the hot sun. It is the perfect summer tea that is specially suited for accompanying the inordinate amount of time you’ll spend reading Dani Hoot’s intensely exciting new YA space opera, The Quest. Surely, you’ll need something to coax you into a state of semi-relaxation, especially when your brain is racing ahead of itself with anxious thoughts about the sharp turns and twists this exciting story takes.