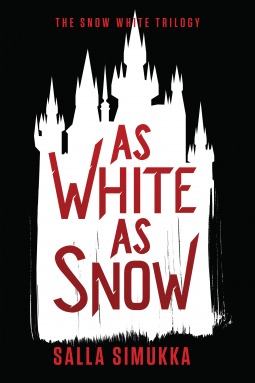 Our faith is as white as snow. It is pure and bright. It leaves no room for doubt. Our faith is like the light that will blind the sinners with its strength. Our faith will burn them even as the stubble of the field is devoured by fire.

For those that read the review for As Red As Blood, the Finnish heroine of the first novel has returned. If you haven’t had an opportunity yet to read As Red As Blood, here is a quick recap. As Red As Blood introduces the reader to Lumikki, a solitaire, quiet girl who finds herself drawn into unexpected situations and violent missions when she discovers a bag of blood soaked money left out to dry in a dark room. Now Lumikki has ventured to Prague after months have past from her prior ‘adventures’ to have a vacation and return to her solitaire life. Of course, such an anticipated time of relaxation is short lived when Lumikki meets the anxious Lenka who claims to be Lumikki’s half sister.

Despite Lumikki’s unwillingness to believe Lenka’s mysterious and heart breaking story, Lumikki eventually is pulled into Lenka’s life which in turn draws her into the dangerous cult called the White Family. Once again Lumikki is unexpectedly placed in situations that put her life in dangerous and leave her once more on the run. It is during these particular occasions that Lumikki realizes that perhaps she is unable to do everything alone when it comes to her own survival.

Once again I found myself fascinated and fond of Lumikki. Watching Lumikki change and adapt from a solitaire creature to a woman growing to survive and love is a beautiful event to watch unfold. Her fondness of Lenka is a kinship that any reader can relate to whether they have their own siblings or have bonded with others that have become like family.

I have to say though that one of my favorite parts of Simukka’s story telling, (because in truth sometimes that is what she does when it comes to Lumikki) is her gradual revelations of why Lumikki is how she is. I adore the fact that she has interwoven the Snow White and the Snow White and Rose Red fairytales so seamlessly into her writing even though Lumikki’s tale is so different from what we expect to read when the reader sees a trilogy titled the Snow White trilogy.

I wait and hope that with the finale, we see more of Lumikki’s past revealed, especially that of Blaze. I will keep my fingers crossed for our unwilling heroine that she finds her happy ending. Until next time, happy reading!

The sky above them was dark and full of stars. In that moment, every single one burned just for them