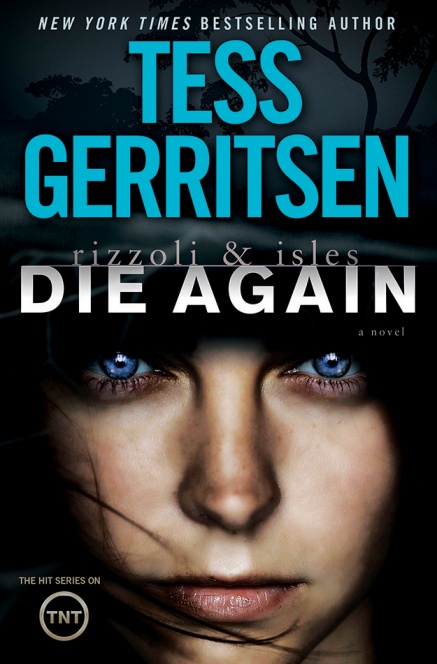 Notes About Interview-“BR”=Bibliophile’s Reverie & “TG”= Tess Gerritsen
1. BR: What sparked the idea for this latest Rizzoli and Isles novel? Do you have a preconceived idea of how far you’ll continue going with both these characters?

TG:Like most of my novels, DIE AGAIN started with a real-life incident that gave me an emotional “punch in the gut,” as I like to call it.  My husband and I were on safari in Africa.  A group of us were in the bush, enjoying sunset cocktails, when a leopard suddenly walked into our clearing and came toward us.  Our guide quickly placed himself between us and the leopard, protecting us.  It was a frightening moment, and it emphasized how dangerous the bush can be, and how much you have to rely on a guide to keep you safe.  But the thriller writer in me couldn’t help thinking: What if we trusted the wrong person?  What if the guide who met us at the landing strip isn’t the man he claimed he was?  What if the most dangerous creature in the bush is one who walks on two legs?  That inspired the plot, which involves leopards, big-game hunters, and a series of murders in Boston.

I don’t know how far I’ll go with the characters Rizzoli and Isles.  There is a point at which every series should end, but I’m not sure I’ve reached it yet.

2.BR: What type of research was involved when coming up with the concept of Die Again?

TG: I had to do quite a bit of research on leopard biology and behavior, and on the biology of cats in general.  Leopards are fascinating creatures — solitary, powerful, and surrounded by all sorts of mythology.  I also did some research on taxidermy, and even helped skin and break down a deer carcass, just so I understood the process that a hunter goes through to turn his kill into meat.

3. BR: Having never watched the TNT series before, based on your book series, how does the television adaptation differ from the books series? Will people familiar with your books have a wholly different experience w/ the series than those who haven’t read the books?

TG: There are certainly differences between the books and the TV show.  In the books, Jane is quite an ordinary looking woman, and a large part of her personality has to do with struggling to be noticed.  On TV Jane and Maura are both beautiful, and there’s no way any man wouldn’t notice them both.  The TV show also has quite a bit more humor, which is a big plus, and it focuses more on the friendship between these two women.  In the books, that friendship develops slowly over the course of multiple books, and it remains somewhat wary, with many ups and downs.

4. BR: What other types of areas of crime would you love to explore in future Rizzoli and Isle novels?

TG: I’ll be starting on #12 in the series, and I already have some fascinating subject matter for the plot — which I’m not ready to talk about!

5. BR:Do you have any comments for our devoted blog readers, many of whom are huge fans of your books?

TG: I just want to thank each and every reader who has ever bought one of my books.  I could never be a writer if there were no readers!  (And no, I don’t yet know what happens between Maura and Father Brophy…)

Thanks so much Tess Gerritsen for taking the time to answer these questions, and I look forward to reading any future installments in your Rizzoli & Isles series! 😀

Increasingly, I seem to be developing a steady love for well-written thriller fiction, the kind that keeps you on the edge-of-your-seat, and instantaneously wipes away all muddled storm-clouds of doubt hanging over you like a funeral pall. The only dark, menacing “pallor” of sorts hanging,unnervingly, over this type of deftly-written thriller mystery, written by popular writer Tess Gerritsen, is the futile sense of mystery and intrigue behind several unrelated, sketchy murders in the book, all stemming from the first discovered murder of a noteworthy taxidermist in the second chapter of the novel . Unpredictably, the novel,though, begins first six years prior to the murder that sparks the later investigation, within the remote region of Okavano Delta, Botswana. In this suspense-drenched beginning scene, Tess Gerritsen meticulously utilizes skilled minimalist language, which sets the scene, allows the suspense to slowly emerge through the progression of the scene, till the explosive “bang” towards the end of the introductory chapter, leaves you reeling for what could follow after. This is the point in the novel, analogous to the black-out in a police procedural, or even an episode of Bones (one of my personal favorite crime-scene investigation type television series),before the light comes back on, to resume at a scene further in the future.

For, we are then reintroduced to the main crime-investigating duo, Rizzoli and Isles, whom I am meeting for the first time,. Already, I immediately understand their popularity, in that their banter, their sharply contrasting personalities, are a dynamic as meaty and rich, as that of some of the best teams of crime investigators from other series, from Scully and Mulder, to Bones and Booth. Of course, it is refreshing to see two women take center-stage, and show off their own charming, distinct personalities, and their skill with crime-solving abilities in a totally non-flashy, non-gimmicky way. The author takes the necessary time to really let their unique personalities shine through such scenes that  routinely involve heavy-duty  scientific explanations, behind some of the crime-scene evidence, or for the two characters to feud over what is the most plausible solution to the riddling crime. I love the way Rizzoli and Isles also represent the different modes of approaching criminal investigations, with the clinical observation of the real evidence that Isles, the medical examiner specializes in, or the interviewing of witnesses/corroboration of witness facts that Rizzoli and her various criminal investigators are trained to handle, and the way that these two branches converge, uniquely, as if to reflect the friendship both Rizzoli and Isles share. I hope to read from the beginning of the series, chronologically, to the end to get the full understanding of their development.

We also get a carefully-research, well-implemented section about taxidermy, an intriguing discussion on the psychology of violence, as compared with the ruthless patterns of hunting which feline species of animals have adapted to use, while foraging for prey in the wild.  Tess Gerritsen, in these sections, conveys cerebral  knowledge of the complex workings of the human psyche and the areas of that psyche which may be deemed “amoral” by some. All of this is written in clear, effective language, through the use of slight metaphors, and carefully-incorporated, recurrent motifs.  In another sense, the author even rewards the scrupulous reader, digging down layers into layers of the text, providing some interesting and fascinating (sometimes troubling) insights on human nature.

For the most part, Die Again is a briskly-paced mystery novel , and it can be read and enjoyed by any voracious reader of thriller novels, regardless of whether they have any familiarity with the Rizzoli and Isles series of books. There are slight hints of continuity throughout the book, which does not stifle the ongoing suspense of the core mystery, but does add a hefty amount of rewarding continuing development of the central characters of these series of books. I personally loved being introduced to the rich comparison between the burgeoning tensions of the family dramas of both Rizzoli and Isles, which offers sometimes a great respite from the tense, exhilarating “crime scenes,” where various clues, expertly sprinkled throughout the book’s 330 or so pages, slowly reveal themselves, allowing you the chance to ponder the mystery at hand, in the midst of gaining more insight into the characters in these novels. And without having ever read a Rizzoli and Isles book, I was surprised that I grew so attached to both central characters so fast, even while confronting their various sources of upheaval in their private lives, away from crime, for the first time.  Again, Tess Gerritsen, impressively, can write stories that appeal both to newcomers and seasoned fans, without depriving either type of reader of any enjoyment of the series.

Sometimes, elements of the progressing crime story feel a bit contrived and formulaic, but again it is the richness of the main characters, and even well-developed side characters, that really differentiates this book from the litany of other thriller novels out there. This series is highly-enjoyable, fun, and dangerously suspenseful, and even with its “rough-around the edges,” feeling at times, it is never overwrought, or too lengthy, but instead is a book that will chase away hours of your day and provide you with some much-deserved, though high-caliber suspense during your down-time.  After reading this, I definitely have both a new-found love and appreciation for this series, but also I will be venturing to the library to find the first season set of DVDs of this incredibly fun thriller/crime investigation series!