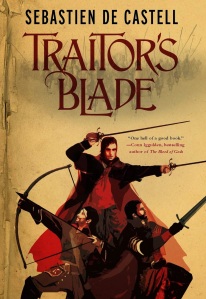 A mix of The Princess Bride, Three Musketeers, and Brother’s Grimm, Sebastien De Castell’s Traitor’s Blade has everything you want in an epic fantasy. From swashbuckling action, to magic, to romance, and with Brasti’s crazy archery skills, I enjoyed every moment while reading this novel.

Following Falcio val Mond, First Cantor of the Greatcoats, those who uphold the King’s Law, we are taken on a journey to finish the secret set of instruction each Greatcoat received before the King’s death. Hated and feared throughout the land, Falcio and his friends find themselves in trouble more often than not. Between fighting their enemies, no one wanting to help them, being betrayed, and wanting to help a young girl from being assassinated, Falcio and his friends must keep to the promise to the king and uphold his law in everything they do.

And as any awesome hero, Falcio and his crew all have long coats that they never take off….

Full of pockets for weapons, lined with bone to deflect arrows and maybe even bullets, these coats are anything but a fashion statement. I enjoyed the creativity given to this article of clothing and the creativity De Castell had in the songs he created for the Greatcoats to give to the people to remember the King’s laws. It reminded me of the Dwarves in The Hobbit.

I also enjoyed the relationship the three main characters had. You could feel the chemistry they had together starting on the first page, and know that even though they weren’t related, they were like family. Each character had their own unique voice and I easily fell in love with them all and wanted to know where the characters were going and how it would all play out.

And what is the first rule of sword fighting? “Put the pointy end into the other man”. De Castell has a great sense of humor in this novel, yet still keeping the story serious and to the point. Maintaining that sort of comedy without seeming silly or out of place is a hard thing to do, but De Castell nailed it.

The only problem I had was I wanted to know why Falcio loved his wife so much. We didn’t get to know her very well and I want to know what she was like to make Falcio so crazy for her.

All in all, I give this novel a 5/5. It rarely slowed down and I never got bored. I can’t wait for the next book in the series and I hope you all get a chance to read it. I also got the pleasure of interviewing the author. Below is the Q&A conducted with Sebastien De Castell.

1. What kind of research did you do for the fighting scenes, such as the detail for how the character’s body reacts to a fight and the choreography itself?

I used to choreograph sword fights for theatre and other media, which definitely helps when writing action scenes for the book, but not for the reasons many people might think. It’s not just about putting every move or technique you know into the scene. What matters most is that every action scene needs to be its own story. It needs to have a beginning, a middle, and an end. Each one needs to be distinct and meaningful; every cut or thrust needs to somehow reflect the individual characters in the story.

For me as a writer the goal is to write a fight scene as if it were dialogue – to do my best to make each character’s actions as distinct, personal, and emotionally motivated as the words they use. If I can do that well enough, then I can shift out of the movements themselves and let the reader begin to shape the back and forth of the battle inside their own mind and fill in the details so that I’m always telling a story rather than documenting a series of movements. One of the most dramatic fights in Traitor’s Blade doesn’t happen on the page at all: Falcio is about to face a smiling armored man with an axe – a fight he doesn’t think he can win – when the tragedy of his past comes crashing down on him. We shift from the fight into that horrific memory, and when we come back, Falcio’s opponent is dead on the ground and he himself is in a state of shock. At no point is a single move of that fight described but when I ask readers about it they remember it happening in detail.

2. How did you come up with some of the Saint names, such as Saint Gan-who-laughs-with-dice?

The idea for the way Saints are referred to in Traitor’s Blade came from listening to blue collar guys talking in bars when I was a touring musician. Between sets I’d hear these guys talking about people who they figured were getting big egos or acted like martyrs. “Oh, Christ, gotta go fix the plumbing for my mother-in-law, Saint Margie-who-gave-up-her-vacation-home-for-us.” or “Did you here about Pete I-coulda-been-in-the-major-leagues? Guy pulled his shoulder lifting a twelve pound weight at the gym.”

Despite being in a fantasy world, Falcio, Kest, and Brasti are still kinda working-class guys (albeit with swords and cool leather coats.) So I gave their culture a sort of subversive reverence for the Saints – as in, ‘they’re better than us and we know it but screw those guys anyway.’

The individual Saint’s names always try to invoke a visual image – something that allows us to see them without having characters suddenly start describing them.

3. Having the Greatcoats sing during battle to keep up morale was one of the little details that made a huge difference to me in the battle scenes. What was the inspiration for the songs?

The Greatcoats often have to issue verdicts without being able to count on anyone being able to read them in the small towns and villages where they travel. So they sing the verdicts, imposing the words overtop of melodies people are already familiar with (a practice that was prominent all through Europe by travelling minstrels and bards throughout the Middle Ages.) So they know the power that song has over people and how ingrained it is in their psyches. That’s why I thought, when they were in the ‘cuffs’ fight and needed to get the other caravaners on their side, singing while fighting help make that connection. It also distracts drives the opponents a little crazy, which always helps in a fight.

4. Which character did you have the most fun writing?

For sheer good times while writing it was Ugh, the torturer (whose name is not actually Ugh, of course.) He’s just one of these strange, broken people who we get to see have this unusual transformation over the course of just a few scenes. He also helps reaffirm Falcio’s faith in the world at one of the darkest moments of the book. Also, he’s one of the only characters in the book with a thick accent so that was fun to write, too.

5. You mentioned in an article that there are four novels in the series that follow the character’s deeper conflict, does that mean each will be for a different character and if so, will we see some of the same characters in each novel?

Falcio is always our viewpoint character as it’s really through his voice that we hear the story. However in book 2 and beyond, we start to go much deeper into the lives of the other characters. Falcio has this desperate need to protect the people close to him and so watching them sink into their own dark journeys is part of what drives him in the second book. He sees Kest paying the price for having wanted to be the greatest swordsman in the world. He sees Brasti slipping away from the charming rogue role he’s played his whole life. All the while Falcio himself starts to question his idealized memories of King Paelis. Valiana, Aline, and the Tailor all take more central roles in the second book than they did in the first, and the clash between their different visions of right and wrong will shake Tristia’s very foundations.

One thing I wanted to mention is that, as a reader myself, I hate getting to the end of a book and finding out that I have to wait a year to see what happens next, so although the Greatcoats is a four-book series, I’m committed to ensuring that each book is a complete story in and of itself. I was determined with Traitor’s Blade to end the novel at a point that would give readers a satisfying conclusion rather than simply a cliffhanger, and I’ve worked very hard to do the same with Greatcoat’s Lament, so I very much hope that readers will enjoy it.

6. What advice do you have for beginning writers?

Write the book you most want to read.

Don’t worry about what’s hot or current and don’t worry about people thinking your idea isn’t cool enough. If you really want to write about sparkly vampires or magical elves, do it. Figure out why you love those characters and bring that into your writing.

I wrote Traitor’s Blade because I love characters like Falcio, Kest, and Brasti. I didn’t worry about what I’d put on a query letter or whether people would tell me that swashbuckling swordsmen were out of fashion. I just wrote the book I most wanted to read. It turns out that if you do that there’s a good chance other people will want to read it too.