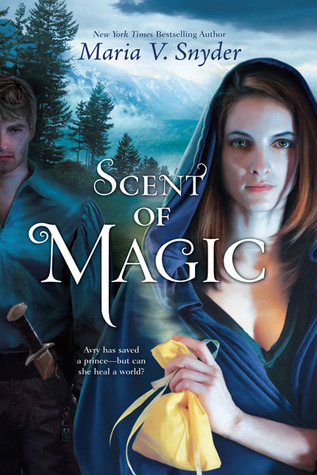 Much like the first novel Touch of Power,Scent of Magic is yet another deceptively simple novel, which really is a fairly complex, multifarious novel under the surface. Maria V. Snyder meticulously writes with measured prose that seems to be written both clearly and effectively. For those that have read the first novel, you are well aware the series involves a world that has recently been thrown in political disarray, after a deadly disease is unleashed by some unknown source or group into the world. The novel’s title female protagonist happens to be a healer, a group that is subjected to distrust and even unfair allegations about not being able to effectively cure the disease. Of course, we learn that the causation behind the disease, and who really is culpable for allowing it to spread into the world, cannot be solely blamed on one party. When reading Touch of Power, you’d be thinking that this novel was some kind of thriller, set in a fantasy world, where biological warfare is a very real threat for civilization and the livelihood of the people that inhabit this fictional world. And, this mystery of who really brought this disease into the world and why is a mystery that persists throughout Scent of Magic, and it is really just one of a myriad number of mysteries and other issues balanced so well in this story.

On many levels, Scent of Magic is a novel of growth and self-discovery for our spunky, resourceful heroine, Avry, who proves herself in this novel to be the type of independent, self-reliant female healer, who is more than a healer on many levels. In this book, we really start to see our leadership qualities become more fleshed out, and she begins playing the game of political alliances, which her forest mage boyfriend (seperated from her for most of the novel) was all too familiar with when attending a magic academy with the various powerful sorcerers and mages that have a lot of power in this story’s universe, over the events that unfold and who holds power over certain areas of the world. Yet, Avry really starts to ponder, who really is the pure good guy or bad guy,especially since the ruler she begins working with has some questionable religious stances that are seen by Avry as being antiquated and sexist. Remarkably, Avry still manages to move up ranks in the army of this ruler’s nation,and really starts to develop her own sense of  power and agency  as not just a healer, who hides from the world, but become directly involved with the events that really becomes the core deciding factor of the fact of the whole world, and not just the various smaller countries or regions ruled by different rulers.

Impressively, there are even more levels to this novel, where we finally get whole sections that act as an interim between chapters,focusing solely on Avry’s own endeavors and activities to really help decide the fate of the brewing war that has naturally been developing, ever since the plague was unleashed into the world. And, Maria V. Snyder really does a good job with both Scent of Magic and the first installment with giving us very credible reasons for why the nations of the world are besieged by a spirit of war, which does historically happen after things like disease throw people’s sense of security into a whirlwind of confusion. More importantly, the chapters dealing with Avry’s boyfriend, Kerrick, are very well-written and his character does begin to feel more distinct and unique, in both personality,motives, and flaws than just being the heroine’s lover of choice. Even better, both of them, in this novel, are really shown to be able to carry on important missions, without brooding constantly about needing the other person to give them their sense of identity. Of course, they have moments where they express worry for the fate of one another, as is wont to happen when two lovers are separated for an unknown  span of time. Yet, Maria V. Snyder is very careful to never let their relationship completely dominate the narrative, or their own individual identity as characters.

In a genre that sometimes carelessly throws in “love triangles” for the hell of it or to create contrived drama or angst, the romance of Scent of Magic is very subtle, very effective, and it never overtakes the tale or lay siege to the main drama. Maria V. Snyder knows her characters are smart enough to know that the world is on the brink of war, and now isn’t the time for romantic angst to overtake important tasks that will effectively bring forth victory. Sometimes, her other novels occasionally suffered from moments of contrived melodrama, but this is really starting to be ironed out more in the Healer series, which really effectively shows that Maria V. Snyder is the type of writer that is conscious of their own faults, and really tries to continuously improve herself as a writer. Also, her subplots in the novel don’t feel unimportant or start to feel stagnant at points, which did happen sometimes in parts of her other novels, but I feel the subplots in Scent of Magic are not just more understandable, but they seem to actually influence the fate of some of the larger, more critical plot issues.

Occasionally, there is some pacing issues with the novel, but for the most part, Scent of Magic  is deeply engaging, very rewarding for the reader, and the dialogue remains Maria V. Snyder’s greatest strength as a writer. Her dialogue is always clever and it is never artificial. For any aspiring writers, her skill at writing realistic, often humorous, witty dialogue is a great teaching point. As a writer, my own dialogue can become very stilted, and sometimes it becomes extremely depersonalized, making all my characters have the same type of diction. So, reading Scent of Magic and Touch of Power provides me with a better sense of just how to manage writing better, more fluid dialogue that does sound exactly like the type of dialogue you’d hear overhear at coffee shops.

Now, the biggest reason for choosing Maria V. Snyder as our highlighted author of the month is for her marked progressiveness, when it comes to write not just strong female characters, but interesting female characters. More importantly, she writes books that constantly have male and female characters interacting with each other in a camaraderie sense, rather than always a completely romantic or sexual sense. Yes, her books are examples, in a sense, of feminist literature. But really, her books are examples of writing realistic, deep characters of both genders, without falling into stereotypes or tropes that really often keep some works within this genre from having characters that very realistic or identifiable with readers. Her female magic wielders, fitting with the theme for this month, are very dynamic, multifaceted, and they have very interesting, very realistic, very platonic friendships with other men  that never sink into an area of artificiality. Sometimes, I wonder how much Hollywood could learn from reading her books, because when people are requesting better female characters; we are not simply asking for stronger female characters. We are looking for characters, of all genders,who interact with one another in normal ways, and we are looking, above all, for interesting characters who defy tropes. Sometimes, I think the writers of Once Upon a Time are secret fans of Maria V. Snyder’s books, because the dynamics between the male and female characters of that show seem to echo the progressiveness and realism of Maria V. Snyder’s books.

So, if you’re looking for a novel that is a versatile book that has a multitude of different story elements, including romance, action/adventure, political intrigue, mystery, etc., both Scent of Magic and its predecessor Touch of Power are novels that you would love!!

Also, please be sure to stay tuned next Wednesday for my review of the last book of the Healer Trilogy, Taste of Darkness!!