BLURB:
David was caught in the middle of the city when the zombie outbreak started. His wife and daughters were at home, stranded on the roof as zombies waited below. He would have to fight through hordes of undead, merciless other survivors, and a series of death defying stunts to get home. However, even if he makes it there, how can he be sure they’re safe?
Deadlocked puts you into David’s head as he struggles to get home. Then a final confrontation occurs that could guarantee his family’s survival, but at what cost?
BUY LINKS:
Amazon    Barnes & Noble   Smashwords
Currently available for free on all sites 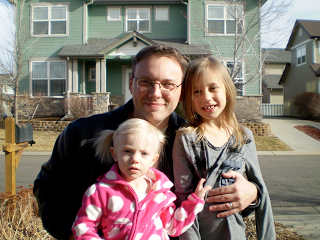 AUTHOR BIO:
A.R. Wise was born in Hammond, Indiana, just outside of Chicago. He’s spent time in several states throughout the years but now resides in beautiful Colorado, near the Rocky Mountains. He is the proud father of two adorable, beautiful girls that inspire him everyday, and is married to an unreasonably understanding and loving wife. He has been writing since he was a child, but the ebook revolution is what finally convinced him to offer his work to the world.
https://www.smashwords.com/profile/view/ARWise

Interview
1.While I’m sure you get this conventional question all the time, what sparked the idea to write a zombie story?

I always wanted to be a writer, and have a thousand stories swirling in my head. The last thing I ever expected to do was write about zombies! A few things converged all at once that convinced me to start this series. First, my mother was diagnosed with cancer and I needed an outlet for my anger and frustration. Writing proved a cathartic exercise that allowed me to work through some of the emotions I was experiencing. Second, I was writing an article about zombie video games for a website and started thinking about what would make a perfect zombie plot. Third, a friend of mine and I were discussing how the media was overwhelmed with zombies lately, and how my friend was fed up with them. I told him that I could write a zombie story that he would like, and he dared me to try. Those three things led me to start the Deadlockedseries.
My original idea for the plot was realized in full with the release of book four, and I had planned on leaving the series behind at that point. However, while writing the fourth book, I started to conjure up some great ideas for a continuation of the series, but not in the conventional sense. I wanted to explore what the world might be like after a zombie apocalypse occurred. Book 5 of the Deadlocked series picks up twenty years after the end of book 4, and explores what this new world is like. It is the start of a brand new series, and I couldn’t be more excited to explore this new setting!
2. I normally ask this of any author who wrote a zombie/vampire story. I’m sure you’re aware that zombies are everywhere in popular culture. Do have any theory behind the resurgent popularity of both zombies and vampires?
In my opinion, it’s because we’re all fascinated (and terrified) of death. Human beings have the unique curse of being aware of our impending death, and can contemplate the meaning of it. Zombies are the living embodiment of our own creeping demise. They are us, as we will inevitably be. Their rotting faces, shrinking skin, and decaying flesh is what’s in store for all of us. When we see a zombie, we’re staring at our own future, and their insatiable desire to murder us is an allegory for our unavoidable death. To me, that’s the secret behind their lure. In the first Deadlocked book, I wrote an Author’s Note that explains how the zombies in the story represent cancer, and the main character’s quest to reach his family is meant to relate to a husband’s desire to make sure his family is safe and secure after learning he might die of the disease.
Vampires, on the other hand, are a different animal all together. If zombies represent our impending demise, then vampires represent a fantasy that we can escape it. No wonder we romanticized them! Becoming a vampire is akin to cheating death, but the cost is turning into a monster. The Paranormal Romance genre has allowed vampires to lose their evil nature, which is understandable. In those books, the dark and mysterious vampire doesn’t just hold the secret to great sex, but also to everlasting life. However, I like my vampire tales to be dark explorations into how evil a person could become in order to cheat death. How far would you be willing to go to live forever, and how many other people would you be willing to hurt to avoid death? A vampire story without that element (forgive the pun) has lost its bite!
3. In the future, what other types of stories would you hypothetically like to write?

I’m currently putting together details for several new horror books. One new series is in the zombie genre, but has a more comedic tone than the Deadlocked series. The others are all unique stories, without any commonly used monster to latch onto. Zombies have proven a fantastic way for me to introduce myself to a large audience, and I’m hoping that once I delve into other types of stories, the readers will come along for the ride.

Horror is a terrific genre that has been unfortunately maligned by a glut of second rate material. I have no qualms about being labeled a ‘Horror Writer’ and plan on exploring a lot more of what the genre has to offer. That being said, I’ve also always been a huge fan of fantasy. There is an epic tale that’s been swirling in my head for twenty years, and one day I’ll finally put pen to paper and get it out there.
For the time being, though, expect to see me doing my best to scare people!

Due to the massive size of the post, I will downscale my review to a few terse sentences. First off, I mostly enjoyed what I read of Deadlocked,

and found the writing both exhilarating and well-detailed. Some of the set-up for the zombie apocalypse was a bit reminiscent of other books, but there was clear evidence (at least from the first novel) that the author consciously tried to change things up a bit for the novel. Overall, I am eager to read the rest of the series, once the literary Gods help me clear my never-ending litany of “Books To Be Read.” 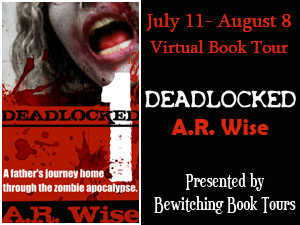