Skip to content
Blurb:
It’s said love can change a person. Medusa
wasn’t always a monster…
Medusa is ruled by duty, to her Titan father and
the Goddess Athena. She’s no room for the 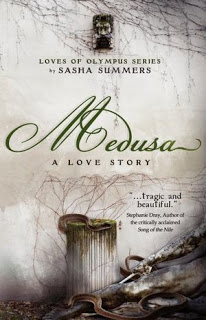 tenderness her warrior guard, Ariston, stirs.
When Olympus frees her from service, her heart
leads her into the arms of the guard she loves…
and curses her as the creature with serpent locks.
Ariston goes to war with a full heart… and
dreadful foreboding. He learns too late of the
danger Medusa faces, alone, and a Persian blade
sends him into the Underworld. But death, curses, nor the wrath of the Gods will
keep him from returning to her.
Poseidon will use Greece’s war to get what he wants: Medusa. He does not care
that she belongs to another. He does not care that she will be damned. He is a God,
an Olympian, and she will be his.
book trailer: http://www.youtube.com/watch?v=90fH7xoZiCo
“This tragic and beautiful retelling of one of the world’s oldest stories tackles the
eternal battle between duty and happiness. Medusa, A Love Story broke my heart
then filled in the cracks with joy. Sasha Summers is simply a mesmerizing new
talent.” ~Stephanie Dray, Author of the critically acclaimed Song of the Nile
Excerpt:
“You asked for an audience, you have it. Now tell me, where do you belong?” Hades’
voice was deep, emotionless.
Ariston swallowed. “Athens.” He met Hades’ gaze, but the God revealed nothing to him.
“Why? You died with honor and glory. Is that not what every soldier wants?”
“My wife…” His voice wavered.
Hades brow lifted slightly. “Lives. You do not.”
“She is in danger.”
“Earthly danger. She is no longer your concern, Ariston.”
“The danger she faces is not earthly, but far from it…” Ariston’s voice was hoarse, his
desperation mounting. He took a wavering breath before he began again. “She is everything to
me. I am proud of my death, but it means nothing if she is in peril. I must know.” Ariston
kneeled. “I beg you. I beg you to return me to Athens.”
Ariston waited, willing himself to be strong.
“Who is this wife?” Hades asked.
“Medusa of Athens.” He paused. “Now of Rhodes.”
Hades was silent, his dark blue eyes regarding him steadily.
“When I die—” Ariston began.
“You are dead,” Hades assured him.
“When I return…die again, I would serve as guardian to Tartarus. I am a skilled warrior,
a skill I might offer you.” He spoke with confidence.
“You vex me,” Hades muttered, the slightest crease appearing between his eyes. “You
offer this to me for a woman?”
Ariston nodded. “She is worthy.”
Hades was silent again, his eyes shifting to the blue-white flames in the massive
fireplace.
“My words do not…adequately express the love I have for this woman. But I cannot
leave her. She is at risk. I must return.” The words came without thought. How could he justify
such emotion to a God who reviled affection or companionship? “As Olympus has my arm and
sword, she has my heart – a mortal, and perhaps weak, heart.”
The room was silent for too long. He would have to fight his way out…
“It is a weakness not reserved for mortals alone, Ariston of Rhodes.” Hades’ words were
so soft Ariston feared they’d not been spoken. But Hades continued, strong and clear. “I will
return you to your ship so that you may lead your men to victory. Too many have fallen from
this war and I would see it end. When that is done, you may go to your wife.” He paused then
added, “When you return to my realm, I will have your fealty.”
The God of the Underworld, Lord of Death, gave him mercy? Mayhap there was one
God he might serve with honor.
Ariston vowed, “You have it.”
Author Bio:
Sasha Summers is part gypsy. Her passions have always been storytelling, history,
and travel. It’s no surprise that her books visit times past, set in places rich with
legends and myth. Her first play, ‘Greek Gods and Goddesses’ (original title, right? 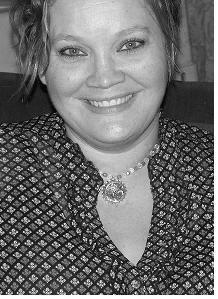 ), was written for her Girl Scout troupe.
She’s been writing ever since. She loves getting lost in the worlds and characters
she creates; even if she frequently forgets to run the dishwasher or wash socks
when she’s doing so.
Luckily, her four brilliant children and hero-inspiring hubby are super
understanding and supportive.
Sasha is an active member of RWA and several Texas Chapters. A self-proclaimed
movie-addict, she is full of all sorts of useless movie tidbits and trivia.
Facebook Author Page:
http://www.facebook.com/pages/Sasha-Summers/213036208773108
Goodreads: http://www.goodreads.com/author/show/5759214.Sasha_Summers
Pinterest: http://pinterest.com/sashasummers/
Twitter: @sashawrites
Webpage: http://www.sashasummers.com

Interview Questions:
1.FF: Having read the tragic history of Medusa’s character, I was always waiting for the right author to vindicate her in a sense. What sparked the idea to write a far more positive story about the character of Medusa,whom I think has undeserving fame as a monster?

SS:I didn’t believe that a woman could do such things simply because she was angry. Anger, for most people, fades. Also, knowing her history, I suspected there was ‘more’ to her story. Which led me to my version. I mean, what would you do to protect the person or people you love most? That’s my basis … but I’m kind of a hopeless romantic and a fan of all things tragic and doomed, too.
2.FF:I always love to ask questions about other books in the genre that might have inspired your book. Are there any books that inspired this story? If they aren’t any, do you have any recommendations of  well-written novels that feature mythological characters?
SS:Hmm. I haven’t read anything similar to mine. I know mythology seems to be on the rise as far as books, so I’m sure there will be plenty to read. Stephanie Dray’s Lily of the Nile inspired me. She uses a brilliant mash-up of real history and mythology. That’s what I try to do.
3.FF: Knowing the complexity of Greek mythology, was it hard to discern specific redeeming traits that helped you to develop your vision of Medusa?
SS:The wonderful things about Mythology – it’s interpretive. There are plenty of versions out there, you have to find the threads that feel right to you and work with them. While some reviewers have characterized Poseidon or some of the Gods as the villains in Medusa, I’m not sure there is really a villain. Of course, writing on in the series, I have to come to an understanding with each of them – so I guess I look for a way to like them all. J
4.FF:What was the last movie you’ve seen, and did you enjoy it?
SS:Snow White and the Huntsman. I did enjoy it. I’m addicted to Chris Hemsworth (my inspiration for my current WIP – Apollo) so I’m not sure the movie was really that good or if I was just bewitched by him… Either way, I enjoyed it immensely.
Thanks so much for having me on your blog today. – Sasha 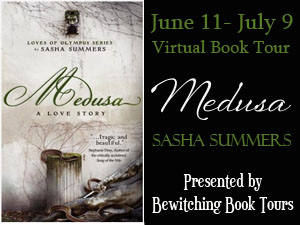