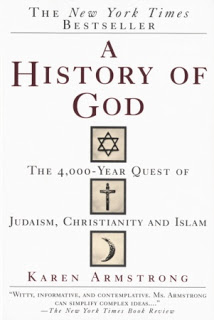 I cannot think of anything as daunting as writing an expansive history of the development of God. To the consternation of some narrow-minded Christians, Karen Armstrong writes about the development of God from the nuanced history of human intellect. Just as science is not immutable, our idea of God has been undergoing continuous change. Thinking of God as some curmudgeonly, static is not only unwise but a dishonest caricature of a far greater agnostic God that is shrouded in mystery.

Whenever we contemplate that nihilistic nothingness, we apprehend the unknowable reality of God. That cold bareness that  imbues our soul whenever we try to constrain God into the barriers of our “one” language, we found ourselves becoming perturbed. Why can’t God simply feel characteristically jealous, incensed, or happy just like we occasionally do? But, humans feel a greater range of emotions therefore that God who seems so obtuse and trite within the Bible only exists as a particular Biblical character’s projection of God. For example, Noah’s God gladly does Noah’s bidding by destroying the heathen that he thinks little of. Noah is plagued with toxic egotism that later reveals itself in the later verses of that story when Ham finds him in a pitiful state of drunkenness. This Noah is the result of a woeful figure whom hated himself so much that he was unloving towards other. The world itself became hostile and Noah became increasingly more fatalistic because love for either himself and others has been absent.  This tragic,insular psyche of Noah’s is similar to that fish that consumes egocentric Jonah. Both of their worlds show a world without a healthy understanding of God.

We don’t know the specifics unless we look at the importance of metaphorical language in the Bible. Karen Armstrong’s book skillfully elaborates on the importance of understanding the artistic quality of the Bible’s figurative language. Some Christians have artlessly leeched the Bible of any such subtlety and beauty by making the Bible become support for denouncing certain minorities or superficial causes like the supposed menace that Harry Potter poses against young, impressionable readers. These Christians sadly besmirch Christianity and give it a public reputation for being as obtuse as God appears within some of the Bible stories. Unfortunately, these Christians make the same mistake that the very human Biblical characters make in following their ego-God rather than a true enigmatic God.

Many people find fault with Karen Armstrong’s depiction of an enigmatic God. Yet, we are being wholly dishonest by pretending that we have crafted some personalized view of God. Sadly, my experience with Christianity has been less about the merits of compassion and more about the importance of rightful belief as if your religious experience can be condensed to forcing your mind to accept abstruse doctrines about an intangible entity such as God. There are many emergent Christian groups that are struggling to make the Golden Rule a more dominant force within the religion. Far too many moral people, like Karen Armstrong, have found themselves being the enemy of Christianity for being intellectually humble and dangerously inquisitive. Sadly, our churches are as cavernous and dark just like the abysmal darkness that resides in that fish that swallowed Jonah.

Karen Armstrong’s History of God serves as the thoughtful book that helps us leave that apocalyptic, egotistical Christianity that thrives on sinful certainty. It helps us realize that we are minuscule in the scheme  of the cosmos. More importantly, it shows that the current predicament Christianity and other religions face are caused by clinging to archaic, childish ideas of God. When Christianity makes scientific reality something that should be ignored rather than revered, Christianity causes itself to lose credibility among anyone who strives to be both honest and humble. Interestingly, much of the Bible cautions against things like pride and meanness. Prudence was often a celebrated virtue by some Christian philosophers. Yet, when some Christians advocate believing in literal translations, they are doing something is both imprudent, dishonest, and prideful. If we ignore the many revelations God has shown us in the form of history, art, philosophy, and science, we deny a more fulfilling idea of God.

For Karen Armstrong, this book serves as a way for us to appraise the complexity of our ideas of God. Many conservative Christians are fearful of such a limitless idea of God. But, we have caved into their demands;we have  given them the license to dictate how God should be viewed and worshiped.   In our polarized world, we need to develop more admirable forms of religion that respect the mystery of God, acknowledge scientific and historical reality, and uphold compassion and humility as the best virtues. Many people are disillusioned with a religion that often vilifies people for being human beings that doubt, postulate, and imagine greater unseen realities. History of God has helped me to achieve a richer view of God that was denied to me at church where I was forced to repress doubts and make myself as vacuous as possible.

I highly recommend this book to any curious seekers that find their seeking abilities being limited by the barriers of institutional religion. As someone who has been unable to believe in God until leaving the church, this book was a necessary step in recognizing that the grandeur of God dwells in those doubtful thoughts that the church identifies as being blasphemous.