Fantastyfreak’s Favorite Things of 2010: The Bibliophilic Necessities of Life.

Welcome readers! Hopefully, everyone who congregates here habitually  enjoyed their holidays even if the promised bliss was really quite a bit stale. Remember, holidays oftentimes are more chaotic than any other days because you are far more attentive to the the positive elements. Therefore, the bitter elements are often noticed instead because the many or few wonderful elements do not live up to those high expectations of bliss that is as contrived as the bliss in Twilight.

I don’t think any of us can nestle in that “small, but perfect piece of our forever.” Certainly, “our scars pain us forever and All is not well.” Moreover, we did not have some unpredictable Sidney Carton redemption moment which involved some demented gnome thing catapulting  our grudges and vices in the upset stomach of someone who neglected their daily dose of Pepto Bismol.

No, I think the overwhelming response is 2011 was an uneven, heterogeneous mixture of triumph and failure. Many of us may even feel the ghost of Christmas Past, present, future, and past-perfect knocking on our doors without a Hallmark invite. Because, they want us to revisit our repressed memories to potentially reshape our corrupted character.When I was younger, I was mostly unafraid of all things that were certifiably scary things. Yet, the Ghost of Christmas Past from the Muppet Christmas Carol made my whole being quiver with chills.

Essentially, the master puppeteers over at the Jim Henson Company thought a girl that looks etched with a oil pastel would be a delightful image for children. Except, the fear she offered infiltrated my innermost fear chamber because she looks like a child who got strangled by white cotton sheets. Now, as punishment for her accidental death by Walmart sheets, she has to take a curmudgeonly English gentleman on a  trip of redefinition which  only Hallmark films could write up.

Anyways, without further ado… Be Banished to the far reaches of Mordor,you pastel fiend!!

Here is the lengthy, oftentimes pedantic listing of my favorite things of 2010!

Meeting thy master:perpetual source of inspiration!! The Artful, The Suave, The Articulate, The lover of all Things Opulent: Anne Rice!!

The whole thing feels incredibly surreal: every element: including the ambitious travel through torrential rain, the exhausting wait, and the short conversation with the one of the most gracious, loving authors. Hardly any material Christmas present is even comparable to the opportunity of meeting her. No one has a better entrance than her. When she enters through the threshold of any bookstore, you can literally hear your heart stop beating with alacrity. You feel dazed when she enters because you can hardly believe the women who excised vampires from a passive, unfeeling existence could be standing before you.

When I went up to her, she knew my name and even remembered some of my Facebook postings. Let’s just say, if no one was around me, I might have fallen unconscious like the many Victorian women in those British productions that are overcome with overwhelming feelings of shock. Both of us reciprocated a fondness for high-quality BBC productions, one of which is noted below as my other favorite thing of 2010.

I’ve been equally addicted to one HBO show besides this called Rome. The show was a decadent, historically accurate show filled to the brim with so many colorful characters of differing backgrounds. I believe the same descriptor can be attached to this show though this one also carries a warning message because it is toxic in the high measure of addictiveness it contains.

On the surface, or at least based on this dainty cover, it looks placid, uneventful. That hypothesis would be very inaccurate because when you begin to slowly unpack this show it is filled with as much depth and intrigue as many HBO programs. HBO programs are reputable for being programs that involve skillful acting and  rich characterization. Many programs, in comparison, have superficial characters and are reliant upon archetypes to propel their stories that are mostly personal agendas or vendettas for an author. Actually, with many books, it is rare to find one with more of a focus on characters rather than metaphysical, philosophical ideas. Many fantasy stories even design stories specifically just to involve complex fantasy world. Again, they populate their world with mundane, uninteresting characters just to lead the readers through an expansive wilderness of over-described landscape features or species in a particular world.

No,Lark Rise to Candleford  introduces many relevant issues in the nineteenth century world it is set in alongside the characters. These issues work cooperatively with the rich characters to weave this rich, seamless world that just pulls you in instantaneously. Every instance I had during my busy Final’s week, I kept returning to this world where two towns of differing social classes are constantly feuding or working together. It all depends upon the well-scripted mishaps that arise that further entraps you in this deceptively peaceful world. You cannot detach yourself for long until the pang of desire alerts you to resume watching the show and continue with your path of negligence of important life duties. This show makes you a participant of the world. You will get frustrated with the foolish choices of certain key characters and you may even begin resembling the mannerisms of the atypical football viewer that screams protests at the foolishness that begins to surface on the field. Yes, Lark Rise to Candleford looks estrogen fueled but it is a show like Anne of Green Gables that caters to male and female audiences alike who love deftly constructed characters, spontaneous tragedy, and eccentric British people/peoples. 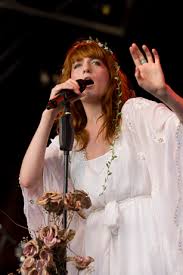 Florence and the Machine: Redolent with Passion and Ignited with Power

If you’ve heard “Dog Days are Over,” sounding from the airways: You know this band already!
Quite literally, upon hearing this band’s eclectic sound, I instantly loved them. They have  a great, upbeat sound that involves many well-known British pop sounds. By the way, did I mention that they happen to be of the British pop variety? Admittedly, I’m a huge fan of British or Euro-pop in general because it completely obliterates all preconceived notions of pop music and designs a sound that does not bear any definitive genre markers.

Symphonic Metal in general is my preferred genre because the vocalists are strong and their voices are not hampered by needless autotune. That technical trick should be widely recognized as an unnecessary musical crutch that destroys the very concept of vocal beauty. Florence Welch, the vocalist of this band, has a robust voice that makes your entire essence tremble  with the intense beauty that is bundled up with her voice. Every instance I hear it, I feel myself become  immovable. The only thing that I can pay attention to is her voice strongly emanating from her open lips.


I cannot stop dancing to the rhythmic, pulsing sounds of the “Drumming Song.” “Cosmic Love” makes me reminiscence on unrequited romance.  “Dog Days are Over,” ejects my ill-feelings about my past and sets myself up for a optimistic future. “Rabbit Heart,” imbues me with courage and forms an unassailable perseverance to right the wrongs within my life. “Howl,” makes me inappropriately hungry for the passion contained in life and makes me desirable for the appeasement of this passion.

Pay no attention to the “pop” genre marker attached. Far too many people will overlook or dismiss this band readily all due to that genre marker. Instead, offer this band’s music an experimental trial on Amazon or Youtube then decide for yourselves about whether the sound  appeals to you.