Skip to content
A Sincere, Forlorn Response to Roy Khan’s Absence from the Upcoming USA tour. 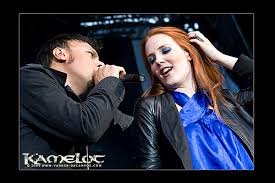 First of all, before I segue into the critical side of this email. I wanted to offer my condolences to Roy Khan who recently was diagnosed with a serious illness. There’s no method of foretelling this event. The illness itself was beyond the realm of his control. Therefore, I completely understand that he is physically unable to perform due to these debilitating conditions. Therefore, the below criticisms are not a result of insensitivity.

Anyways, I happen to be an ardent fan of Kamelot who has been waiting for a Philadelphia concert for a long span of time. Every year, I have patiently waited for announcements of this type to surface. Upon hearing the band’s music, I have been enraptured by the rich instrumentals and Roy Khan’s deft, emotive voice. For me, Roy Khan’s voice is inseparable from the music. His voice bolsters the emotions of the music and allows the listener to completely been entrapped in the  music’s ethereal atmosphere. Hardly any other metal band of this kind has maintained this ineffable sound that has always kept my interest without fail.

I’ve been greatly anticipating the band’s September 14th Philadelphia concert for the opportunity to hear this music performed live. I wanted the chance to have feel that same energy produced by the albums in a venue with good acoustics. With superb bands like Kamelot, the ambience of a live performance is unmatched especially when the singer himself always adds more layers to that first layer of complex musicality.

When news of Roy Khan’s illness was announced, I felt greatly despaired and naturally betrayed. Though this occurrence was beyond any individual’s control. With my fervor for this band, I could have formed this letter into a belligerent note that is filled with obscenities. Knowing the band’s difficult situation where large sums of finances were involved, I cannot fault the band with their decision.

Yet, I still feel greatly disappointed by this news. Kamelot has been an integral part of my life when it comes to finding a daily cathartic release. The band’s music has been a fundamental element in the development of my current novel “Death Seer.” The same thing cannot be applied to other band’s because Kamelot happens to be one of my favorite. Hardly any band’s themes resonate with me to the same degree that this band’s music. Roy Khan’s voice has strangely become the voice of one of the story’s characters or the expression of my own personal emotions that I could not properly express. His voice soars and pierces the soul.

Formerly, I was thinking of writing this letter to demand the band to postpone the concert or at least offer the opportunity of a refund. Rationality surmounted those earlier feelings and allowed me to attempt to understand the band’s decision. Even then, I still will feel a void September 14th because of Roy Khan’s absence. I will try to accept the new singer’s interpretation of these masterful songs. Though, I will still find these feelings to be uncontrollable because the core of Kamelot’s sound has always been Roy Khan’s voice. Even with the skillful instrumentals of the band, there will still be this gaping hole in my heart because Roy Khan’s absence will permit the music to have a missing element. On that night, I will be unable to not allow myself to feel despaired by this absence. For most dedicated USA Kamelot fans, it will surely feel like an unnatural concert even with the vocalist’s best efforts.  Sadly, it’s nearly impossible for any vocalist to equal the main vocalist of the band. This happens inevitably because the sound of the music works in tandem with the singer.

With that, I implore the band to consider touring in the USA sometime next year to allow Philadelphia to assuage our feelings of disappointment. As a committed Kamelot fan, I want to have the opportunity to hear Roy Khan’s voice reverberate beautifully through the streets of Philadelphia. If this happens to be the only concert in Philly, the city of brotherly love will never be graced with this talent. Again, I will attend the concert because of my understanding of the circumstances. And I hope for Roy Khan’s quick recovery from this illness. Thanks,From a Philadelphia Kamelot Zealot,Justin B.