All good things have a subversive side, and Ebay is not exempt from that reality. As you may already know or do not know, book bloggers like myself tend to receive ARC in exchange for consideration of a review of a book(consideration is key, as no one has an infinite amount of time to review every single ARC received). Generally, these ARCs are understood by bloggers like myself, journalists, booksellers, and members of the media as items for which are not to be sold at all, but it is widely recognized that is perfectly fine and acceptable to do so after a book’s official market release. There is a significant reason as to why this timing is important in the world of trademark law.

Now the reason why this topic comes back to my attention is due to the shockingly absurd discovery of a “professional” ARC seller, selling the ARC of Anne Rice’s forthcoming, highly-anticipated sequel to Prince Lestat, Prince Lestat and the Realms of Atlantis. Right around this time, I wrote a blog post, discussing whether or not selling an ARC, prior to its official release date (emphasizing this in case of confusion), is illegal or considered theft.

On the Lestat Book Coven, we worked together to reach out to Ebay by either reporting the item, or by speaking directly with a customer service Rep to no avail and sheer futility. I did not enjoin or incite anyone to engage in a “public shaming” type of witchunt, which is something I find absolutely reprehensible and immature. No, we used proper avenues to address the issue, and my findings is that Ebay is most definitely aware of this issue, but feel that these incidents are just too prevalent in number to effectively control.Sadly, the item appears to have been sold twice, respectively priced at 200.00 dollars, making nearly four hundred dollars off the ARCS of these books sold prior to November 29,2016, the official release. I feel sad to report that this individual made quite a profit through questionable theft, and it is why I feel it is worth discussing this important ethical issue, especially as an avid blogger. I deplore this underhanded, shady practice, which needs to be discussed readily.

This brings us to the seller in question, and I hesitantly post the user’s name here, only because I am not a fan of shaming. And that is why I implore everyone here who reads this to remain tactful and mature, please do not correspond or message these sellers yourself in the name of my blog. Please pay attention to the options I’ll lay out further down the post which are far more genuine and mature than engaging in crass internet mob-style behavior.

Anyways, for those mature enough to handle the following, please keep your emotions intact and your urge to angrily message the following person…….AliceActor on Ebay  has been an Ebay seller since 2002, garnering nearly 4,292 feedback reviews since then. Her record is immaculate, indicating to anyone visiting her Ebay store profile that she is most likely a trustworthy, skilled seller. I won’t say anything more..that would be considered defamation (something I fear with these types of posts..so sticking to obvious facts versus suppositions).

Perhaps, not all those years on Ebay have been dedicated to the sale of pre-published ARCs, before release date. But based on the roster of the latest sales, we can say she appears to sell many such books prior to release date. Most of them are priced in a range of 21.99 to 39.99, depending on their popularity and demand. We can infer that Universal Harvester by John Darnielle and The Final Day by William R. Forstchen are probably in high demand, based on their relatively higher prices (both links will take you to publisher’s pages on these items, not the Ebay pages..refused to give this individual business). 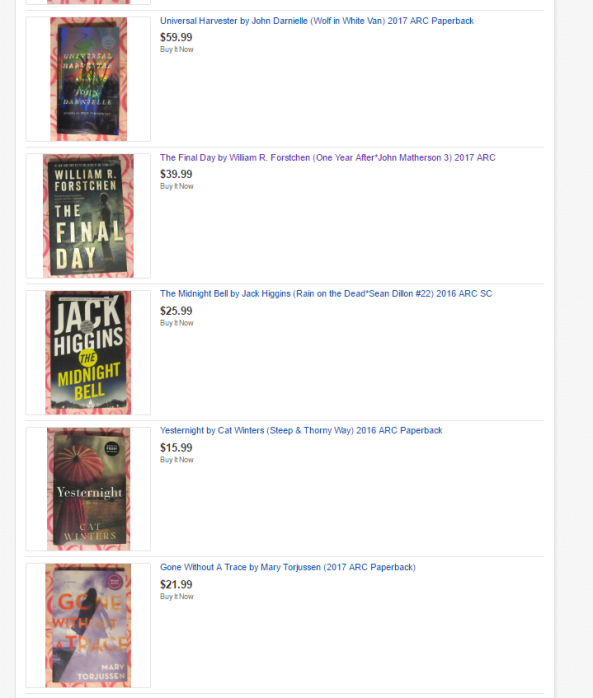 Considering their popularity, both titles are probably hard to get ARCs of if you were to email a publicist and request them for review. If I were to email TOR/Macmillan right now, they would probably say they are either (a) not available, or available on a limited basis, or (b) never answer your emails. And being the clear-headed person I am, knowing ARCs are a privilege, will understand that these publishers have valid, market-prudent reasons to deny request and be discriminate because they are trying to gauge who will help publicize a title the best, or most effectively.Guess what, bloggers and reviewers? You are not entitled to a pre-release galley, they can approve and deny conditionally, and we have to respect their reasons because there is only a limited amount of ARCs available. And that is why those that have ARCS, particularly for big releases, especially have to abstain from selling them prior to the established release date.

But the new blogger, who may be too novice to understand this reality, may feel rejected, and heading over to Ebay be surprised that a number of established Ebay sellers are somehow getting their hands on their ARC, to fuel their black market prepub ARC trade. And that can be extremely disillusioning to them, though it is entirely out of the publisher’s hands. But is it??

On AliceActor’s Ebay product detail page for Universal Harvester by John Darnielle, the following disclaimer is put on all the sales..Read the below first,then let me carefully extrapolate on this/explain why the use of “first sale” doctrine is not substantiated whatsoever, basically, not supported by the text of the statute.

While this disclaimer may be written on strong logic grounds, it really is not. Here’s what a three minute search through Wikipedia yields in terms of clearer explanation of the “First Sale” doctrine of the U.S. Copyright Act. I am going to post both the Wikipedia interpretation of the text, then the actual language as well. Then I will parse it, and explain what it means for those like AliceActor, engaging in the immoral act of selling/profiteering on selling ARCs prior to release date. Please note my interpretation is not a legal interpretation, as I hold no credentials as a lawyer of any kind, purely amateurish, but I do not think you need these credentials to understand how the first sale doctrine relates to the resale of Advance Reader Copies
First, the Wikipedia interpretation of terms of “resale:”

In trademark law, this same doctrine enables reselling of trademarked products after the trademark holder put the products on the market. The doctrine is also referred to as the “right of first sale,” “first sale rule,” or “exhaustion rule.”

In layman terms, this means resale is permitted only after the trademark holder ,the publisher, puts this product on sale. Clearly, before the official publication date, this item was never put on sale officially. When you receive an ARC, it is not a transfer of sale, not that type of ownership, this may sound strange to some, but you are being given a privilege, a complimentary copy with no barcode and ISBN number affixed to it, to give it the identification of a marketable good.  And again, just as a reminder, we are talking selling it before pub. date, meaning it is acceptable through this interpretation to sell it after the book has been officially released.

(d)The privileges prescribed by subsections (a) and (c) do not, unless authorized by the copyright owner, extend to any person who has acquired possession of the copy or phonorecord from the copyright owner, by rental, lease, loan, or otherwise, without acquiring ownership of it.

Again, please do not take my interpretation above as being a legal opinion, it is merely that of someone that reads a lot of books, has researched into the issue, and is weighing in on this with a non-credentialed opinion…Just making sure all grounds are covered.

How does this happen? How does someone sell Advance Reader Copies for a number of years without being blacklisted, without having their source of these Advanced Reader Copies blacklisted? How are these disreputable people getting their hands on early copies. And most important, what can we do about this?

Every Sunday, I will have a new post weighing in on this issue, and providing examples of how to go about reporting these sales. The only means to stop this ugly trade dead in its tracks is work civilly, productively, and honestly towards exposing this trade and preventing anymore of these sellers from taking advantage of readers, publishers, and authors alike in the name of profiteering and greed.

Today, I feel utterly impotent, as many publishers probably feel, in the face of this issue. These publishers work hard to put together a book, expend lots of energy and stamina much like writers to hopefully produce a product that gains attention and well-deserved financial compensation. And bloggers are part of this algorithm, we help spread the word of books because we love books and what they give back to the world, we are not doing this because of greed, and someone like #AliceActor undermines what we do, it undervalues and discredits the reasons why receiving ARCs is a privilege to respect, as with any privilege.

To me, as with many writers and publishing professionals, this is an emotional issue, it is a deep-cutting betrayal. As a way of showing our respect for these publishers who work so hard to bring titles to honest readers out there who will give fair compensation for work, I think we should band together to help expose and constructively try to remove the sale of these ARCs from Ebay and other iterations of these types of sites. But given Ebay’s clout and ubiquity, we will start there, and that is why I ask everyone here to always “Report an Item” whenever you see the sale of an ARC prior to a book’s release date. Together, we can reverse the pattern of impotence in face of clearly immoral behavior ,but please refrain from disruptive, immature behavior. When faced with ignoble, indecent behavior, we must engage in civil, tactful behavior, regardless of how upset we may feel by this type of activity.

And to take a great phrase from a wise woman (you know her, but you might have perfectly valid reasons for not liking her), these Prepub. ARC sellers are a “basket of deplorables.” And when it comes to their misdeeds, staying silent is not golden.

UPDATE 10/2/16: While working on my list of ARCs to request, I found this illegal sale of The Burning World ARC, sequel to Isaac Marion’s Warm Bodies, up for sale. For those that may have tried requesting this through Netgalley, you know that it is being given on an extremely limited basis. Of course, it’s not hard for those that sell them for profit to get them. This is why this issue is so important because almost every book, before pub. date, has some ARC being sold by some wily Ebay seller for profit.#AliceActor is just the tip of the iceberg. Again, no direct link available because I want proper avenues of purchase to be promoted.