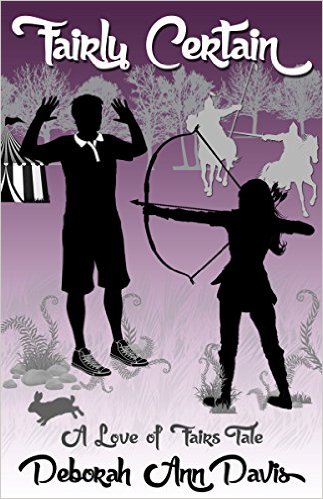 Book One of the Love of Fairs series

What happens when a Computer Geek challenges a Medieval Outlaw?
Petir takes a rough tumble in the Connecticut woods, and awakens in the middle of old England. His instinct to freak out is tempered by the arrival of a fair maiden wearing a bow… and arrow. Throwing caution to the wind, Petir decides he has nothing to lose by pursuing Maid Rianne. But when she is captured by the enemy, a geek with no ability to defend himself must find a way to rescue the fair maiden.

This is any geek’s dream come true, and that’s exactly Petir thought it was. Suddenly he is cast back in time, living during the reign of King John in merry England. He finds himself in the midst of Robin Hood’s gang, falling in love with Maid Rianne who is betrothed to the evil Gisborne.

I found this to be a great modern twist on the original tale of Robin Hood. The main character, Petir, was pretty good but I thought he was a little bit static in that all he thought about was Maid Rianne, but never much beyond that. I wish he grew a little bit more and there was more dynamic than that. I loved Maid Rianne as she had more depth and had to figure who were really the good and bad guys throughout the story.

All in all, I give this story a 4/5, as Petir could have had more depth, but recommend it to anyone who love this era in history or Robin Hood!