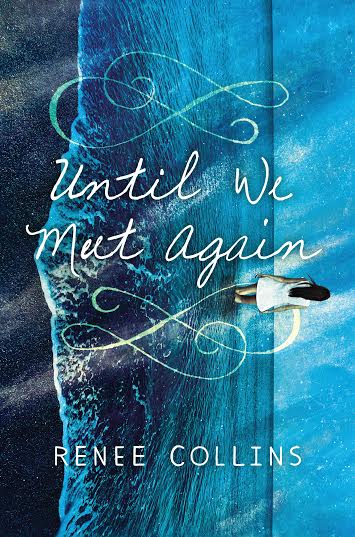 Country clubs and garden parties. The last thing Cassandra wants is to spend the summer before her senior year marooned in a snooty Massachusetts shore town. Cass craves drama and adventure, which is hard when she just feels stuck.

But when a dreamy stranger shows up on her family’s private beach, claiming that it is his property-and that the year is 1925-Cass is swept into a mystery a hundred years in the making. As she searches for answers in the present, Cass discovers a truth that thrusts Lawrence’s life into jeopardy. It won’t matter which century he is from if he won’t live to see tomorrow.

Desperate to save the boy who’s come to mean everything to her, Cassandra must find a way to change history…or risk losing Lawrence forever.

Dreamlike in conception, Renee Collin’s historical fiction/drama YA novel Until We Meet Again has a whirlpool, containing dashes of drama, time-dimension crossing, romance. The novel is written with a certain measured restraint, swelling occasionally with bouts of dazzling prose, with mysterious depths of meaning and pensive reflections on the fleeting nature of love itself, and whether certain constructs like soul-mates both defy the boundaries of time, though are restricted too by the constraints it poses. These questions stay afloat in the reader’s mind, as they wide through the deceptively calm waters of Renee Collin’s novel.

The story literally involves two characters, who by pure chance, cross the boundaries of two different times, and find themselves meeting on a beach near where the one main character’s family is vacationing. Featuring a snarky main character by the name of Cassandra, along with a somewhat mysterious love-interest  Lawrence whose family is entrenched in the quagmire of crime and conspiracy, the story has so many wonderful layers, while maintaining a suspenseful pace, as reader’s eyes remained glued to the pages, fretting whether the love that Cassandra finds burgeoning between herself and this man from a past era will remain by the end of the novel or not. Moreover, there is also some surprising revelations that bring to mind the classic Micheal J. Fox Back to the Future films, where any interaction between individuals from completely different dimensions of time, tend to create unexpected paradoxes. Basically, this is a novel packed with incredible levels of drama, written in a way that makes the balancing of it all entirely seamless and natural, versus feeling turgid and boring.

Best of all, Until We Meet Again a novel that is relatable to readers of all ages, all genders (like most books, regardless of what a book implicitly reveals); it is a story that beckons any kind of reader to share in the wistful memories of first love and to ponder the universal themes that it implores the reader to explore. While all times, the drama of the story did feel a little contrived at times, particularly with respects to the crime subplot which Lawrence’s somewhat untrustworthy father is involved.

Just as Cassandra and Lawrence can defy the boundaries of time by meeting on a certain concentration of beach, readers will no doubt greatly enjoy their time visiting this transitory space where they vicariously experience the rapidly-changing vicissitudes of romance and drama that effectively makes this novel a truly enjoyable, mostly enthralling read. Yes, I did feel like whatever thoughts and musings I had, while reading it, mostly evaporated by the close of the story- it was still a dramatic escapade to the types of stories that provide a nice eventful escape from the mundane world.