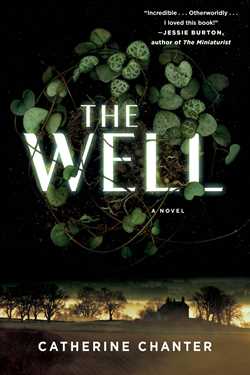 Beginning in a literary comatose state, Catherine Chanter’s grim, methodical psychological thriller “The Well” takes some time for the reader to adjust to the slow pacing of the story. The beginning of the story has a glacial pace, introducing us to the story’s main first-person perspective Ruth Ardingly, who remind readers of the passive,rather mundane Offred from Margeret Atwood’s The Handmaid’s Tale, as both character perspectives begin with a rather deceptively sedate story in a rather mundane setting. Within many speculative fiction novels of this kind that involve some feasible future scenario, attention is invariably focused upon the foreignness of the post-apocalyptic setting, or litanies of description about the snazzy, otherworldly technology.  The Well could have easily been a cautionary tale about overuse of finite resources like water, in a speculative fiction novel that has an ecological thrust in its didactic message. Instead, the speculative fiction elements of this story are merely narrative elements or motifs that merely provide an interesting premise to pull readers in. It certainly caught my attention, as I am easily succored by novels with premises that promise an interesting speculative story-line that tackles the worrisome issues of our time in a futuristic, what if? sense.

Yes, there are some minimal discussion about the way the depleted water resources, due to a seemingly endless drought in the UK, has been crippling the whole country’s economy, and causing mass riots. Yet the story is really mostly about the disintegration of a family, a marriage, an introspective glance at one character Ruth, with a strange proclivity towards spirituality. She never really tries to exhume from her subconscious a better sense of her own self-identity as a woman, especially when she rather smother herself in societal strictures and facades versus thinking too much on her own self.

This novel cannot be classified as science fiction, or post-apocalyptic; speculative psychological thriller is probably the most apt description for the type of novel The Well is. Returning to the story’s main first-person perspective, Ruth seems fairly normal, unsuspectingly sane, at least from the reader’s first impression, but the magical realism (another good phrase) of the novel exists in the form of magical realistic elements like the strange phenomenon of Ruth and her husband’s Mark’s farm, being the one sole place that still carries water, or the eccentric matriarchal (almost militant feminist) nuns that later come in, who revere Ruth as the sainted “Rose” that dwells in an oasis within a blighted UK under a severe drought. Ruth’s own muddled perception of her identity is a sharp contrast to the refining qualities that a small idyllic with abundant water would otherwise deliver to most character. More important, Rose never feels like she can truly trust the husband she had been married for twenty years, especially after being acquitted for the charge of purportedly having child pornography stored away on his computer.

Through her ruminations ,the story unravels through her many disparate recollections of the twisted past. In the present, she is under house arrest for illegally having possession of gratuitous amounts of water, and the murder of her grandson, Lucien. Confined to the farm where it seems to magically rain where rain is such an elusive force elsewhere in England, she is forced to mull over so many loose-ends, unfulfilled bits from his past, marred by the grief of the lost of her grandson, and consequently, her husband’s departure. In many stories, abundant rain often means restoration for the character and redemption for their past, yet the novel paradoxically, again lets the aspect of rain resemble the way that Ruth’s own mind is flooded with so much regret, self-loathing that her very identity is entirely out-of-reach for a large portion of the novel. And the reader is the one that must juxtapose the loose bits, and then exhume meaning from the story itself, and figure out who exactly “Ruth” is, and whether she is entirely reliable as a narrator.

Sometimes the novel gets very lost, confused, as to where it intends to go, narrative-wise. The story becomes overwrought at these portions, getting lost itself if the labyrinthine daze of Ruth’s own recollections. The novel almost entirely falls apart in the end, yet oddly enough picks back pace, when the mystery of the son’s murder is focused more on, then there is a gradual climb, and this successive ascent to clarity of meaning towards the end of the novel, in a novel that otherwise gets “lost in translation”  at times. This is most evident within parts, where the convoluted thought patterns of a despondent,grief ridden main character, like Ruth, just become far too bloated and senseless for the casual reader. The ending of the novel is far better, as the author reorganizes the narrative, and really gives it a much more neatly organized ending, to where many of the things you thought were purposeless at times seem to actually carry more significance in the novel.

The novel is especially interesting, when dealing with the question of the purpose of spirituality. Does spirituality really serve as a life-enhancing element for us, or is it a way to lose clarity about ourselves and suppress any thought of authentic self-reflection? In a sense, Ruth drowns herself in the quasi-new age spirituality that the marauding nuns sorta force upon her. She quickly loses herself in the meta-narrative, constructed by these four nuns that enigmatically  come into her life. Ruth thus gets ensnared into even more nebulous thoughts. She loses awareness of the more pragmatic aspects of the spirituality, in that the nuns are actually using Ruth and the miraculous existence of water on her homestead (and her naivete) to really make a profit out of her as the matriarch of a new religion/symbolic lead maiden that exists as an artifice of a person that wishes not to reflect on her disappointing drug-addict of a daughter, her husband she cannot exactly trust even after he is acquitted of a sordid crime. This area of novel’s concentration is where the novel does sometimes get wayward, but yet it’s all so irresistibly interesting, and reminiscent of something from Doris Lessing’s brilliant short story, Room Nineteen, concerning a woman with a fragmented, confused perception of herself.

Is it worth the occasional slog? Yes, The Well is the type of psychological thriller that really rewards patient, scrupulous readers, willing to wade through Ruth’s maze of a mind, and mine a very interesting story that is filled with many intriguing psychological phenomenon. Of course, many stories have dealt with the notion of unreliable narrators, or unclear memory recall, or selective recall. But this story remarkably documents a very different psychological phenomenon, which looks at the very confusing paradox of “why are some people more inclined towards expressions of spirituality, or why is it that more introspection leads us to a more pronounced confusion about ourselves?” Ruth is a character, who acts as a passive observer of the world around her, and she quickly becomes enmeshed,or consumed by whatever large force figures largely in her life. For most of her life, it was about her marriage, or being the figurehead of a new age, militant feminist-driven spiritual cult.

All these disparate elements really come together towards the end, and you will actually be unable to stop pondering the whole novel by the end. You will undoubtedly not be thinking too hard about the ecological thread of the story, which again only serves as a motif of the novel versus being a large part of the story’s plot. Rather, this story  sometimes gets trapped in its own unclear, convoluted ruminations on identity and the purpose of spirituality in our lives (or the dangers of spirituality gone wrong), until the careful reader can really elucidate the meaning of these confused elements themselves. In the end, Catherne Chanter’s The Well  is a very interesting, mostly well-written speculative fiction story that I think any readers that enjoy books that are more slow and methodical and force the reader to tease out the meaning more themselves will positively love for the most part. It looks at the conundrum of identity, grief, and spirituality, in a way that is very different from other novels in the genre of either psychological thrillers or speculative fiction.

Essentially, this novel is very much the spiritual cousin to a Doris Lessing story, and being a huge fan of her meandering, though deeply meaningful psychological novels; I think The Well has that same complex, off-beat element of not feeling like a clear-headed story that oddly enough carries some startling clear insights about the human psyche. The weirdness of the novel will be off-putting or unpalatable to some, but the eccentricities of the novel is what made me eventually greatly appreciate what I read, and it’s something that I can’t help but continue to reflect more on, long after I’ve finished it.

For a novel that is puzzling at its core, I recommend a refreshing blend of tea, the Organic Sencha Green Tea from Two Leaves and Bud, that carries a light orange, tangy sencha green tea flavor that lingers in your palate, as long as the disordered thoughts contained within The Well’s Ruth’s own jumbled-up mind.

Also, it is the perfect antidote to the blistering sunlight of late spring/early summer. Even when it is served hot, the tea still carries that rare ability to quench your thirst and successfully refresh you, though you would think any hot tea consumed in hot weather is something that wouldn’t carry those qualities anymore in such weather.

Whenever I drink it, I first taste that familiar flavorful smooth sencha green tea taste, characteristic of any high quality sencha green tea, accompanied by a very tangy zing of orange citrus, which compliments the sencha green tea flavor exceptionally well.  The tea recalls that paradox of the novel’s antithetical elements at play, in that the magical existence of a farm with abundant rain, in a drought-infected England, doesn’t entirely satisfy  the restless person that resides at that idyllic farm. Ruth is essentially living in an ideal English cottage, yet her past and own dissatisfaction and confusion about her life creates inexplicable chaos within an oasis.

Only a tea that can carry two different dimensions of light, refreshing taste that oddly carries a certain depth can be paired with a book that has that same ineffable sensation of feeling quaint, and oddly mundane, yet also be an extremely interesting psychological story.

When drought is nigh, be sure to stock up on some Organic Sencha Green Tea, from Two Leaves and a Bud.