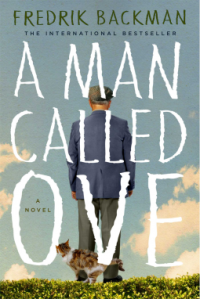 ‘A Man Called Ove’. Admittedly, this title sounds boring and unimaginative. However, A Man Called Ove couldn’t be further from being boring and unimaginative. In fact, it has been a while since I read such an highly enjoyable and humorous novel. So ‘there’s more than meets the eye’ is definitely true when it comes to this novel. In fact, it could easily be its subheading, as it’s a recurring theme throughout the book. Plus, once you get to know Ove, you’ll find that this simple and succinct title suits him and a novel about him perfectly…

Just as the novel isn’t dull, like its title suggest, so isn’t  Ove bitter like his demeanour undoubtedly suggest. Like he says; he just doesn’t go around grinning all the time. Even though Ove comes across as a grumpy old man, not once did I find him annoyin‎g. I actually found him quite funny and I could understand him and his vexations without any effort. Yet I could also easily infer others’ frustrations with him. I find it impressive that Backman is able to pull this off; Ove is quite an unlikable man, however you can actually empathise with him and slowly, as you get to know him, you actually come to like him. So let’s meet Ove:

Ove is a simply guy, fond of regularity and order. He thought there should be some order in things. There should be routines and one should be able to feel secure about them. He could not see how it could be a bad attribute.

Things simply have to be done a certain way and to Ove, dignity means that you can manage on your own when you grow up. There was a sense of pride in having control. In being right. In knowing what road to take and how to screw in a screw, or not.

Ove doesn’t like to waste time on pleasantries, but he has a big heart, cares deeply about certain things and will go to great lengths for those things. Although he’s often rejective, he helps out many people, albeit in his own distinctive way. ‘I’m not asking for brain surgery. I’m asking you to drive a car. It’s got an accelerator, a brake and a clutch. Some of the greatest twits in world history have sorted out how it works. And you will as well.’

Frankly, there’s simply something irresistible about this character. Words can’t express it but it’s definitely there, as many of the characters in the book agree with. Speaking of which, many of them are also very likable and epitomes of certain types of people most of us will recognise from our own life. We all know some blond, shallow, cruel lady that owns a Chihuahua and hates cats (nicknamed by Ove: Blond Weed and Mutt respectively) or a nice, cheerful but clumsy and kinda foolish next door neighbour who means well but somehow always manages to mess up.

The plot is filled with everyday and kind of ordinary events. This doesn’t create a dull story, on the contrary, Backman really managed to present these ‘dull’ events in a way that can’t be described any differently than delightful and amusing. He achieves this via Ove’s thoughts and comments coupled with the hilarious dialogues that make up this novel. This demonstrates that everyday life is full of excitement and riveting things as well. There’s more than meets the eye, remember? Combined with the recognisable minor characters, this creates a lot of familiarity, yielding an easy to relate to novel into which many of us can effortlessly project ourselves.

Although it’s definitely a feel good story, this novel will bring you to the verge of tears as well. It’s very moving and almost heartbreaking. However the tragic parts are well-balanced with the more upbeat parts, thereby preventing the novel from becoming woeful and depressing. Something the magnificent pace and warm and mirthful prose greatly assist with. This forms an easy accessible story, something I personally enjoyed.

To cut it short; this novel will make you laugh out loud, bring you on the verge of crying and will stay in your mind. It is filled with conversancy yet those elements are presented in a way that’s highly enjoyable, which prevents them from being dreary. I find this to be the perfect novel to curl up with on the couch on a rainy, grey day as it’s certain to lift your spirits. It’s extremely entertaining and shows how seemingly little things can have a great influence on someone else(‘s life). It’s a feel good story, but it also gets you thinking and changes the way you perceive what’s around you. I can endlessly rave on and on about how amazing this novel is, but you simply have to read it and meet Ove yourself. And once Ove is in your heart, life will never be the same.