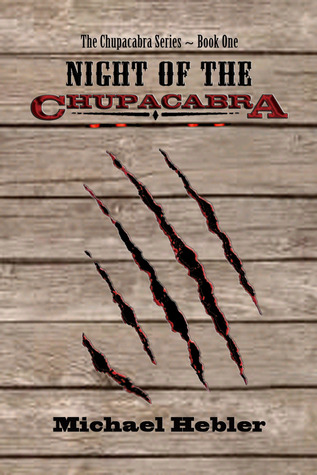 The journey with the chupacabra continues with Michael Hebler’s first installment of the series Night of the Chupacabra. While the third book would act perfectly fine as a stand-alone piece it left a good amount of questions begging to be answered. So with the series of events in the third book still in my mind I decided to continue by going back to the first book.

As with the third book, and like many other tales of horror it starts out around the campfire where we meet Drake, and Gavin. Brothers on their way to make their fortunes, and lives better out west to San Francisco along with many other people, and families. Including Drake’s family consisting of his spitfire wife Lucy, and our favorite pistol of a girl herself Jessie. Even as a sweet little girl she has the spirit of adventure in her, and it is clear she gets it all from her mother. Everything seems nice, good humor, and even adorable for a little bit before the clouds begin to move in. Despite being with his brother Gavin feels like the odd man out, and covets his brother’s family. However, this is the old west just as it was back then not everything can be good, and quiet for long. All hell breaks loose as sounds of an animal enjoying a fresh kill along with shrieks of terror fill the entire circle of wagons. The shadow jumps from wagon to wagon as people run for their lives in their wagons or whatever is left of them as a fire soon breaks out. This cat like creature soon catches on fire as it makes it way over to the wagon were Jessie is asleep. Gavin, and Drake try their best, but are soon attacked by the creature causing both of them to sustain disfiguring burns. As Drake lies on the desert ground he watches as the wagon with Jessie in it burns up completely. His wife thinking he is dead sobs, and leaves him behind. In the distance lays the body of his brother Gavin, and with no strength to turn his head he watches as well as hear the end of his brother.

This opening alone makes you feel horrible for Drake as he watches everything happen, and feeling helpless. Drake was a man who did everything right by his family. While this book is a western horror it is ultimately more than that. It is the tale of a man in search of what he holds most dear to him. A man who never stops giving up, or believing in his quest to find his dear Lucy and Jessie. Obviously these are very human qualities, and things most of humanity can identify with. I have to admit a lot of the questions I had in my mind were answered in the first book. It helped me understand Jessie even better as well, and really if the reader goes back to Night of the Chupacabra they will understand why Jessie has such a distrust of men. Characters aside though the reader can really enjoy Hebler’s constant fresh take on the chupacabra creatures. No two are ever alike it seems. It is also in Night of the Chupacabra that we become aware of the origins of the creature, and how it came to exist laying perfect ground work for a mythos in Hebler’s world. There are still other questions to answer, but I have no doubt that the second book will answer those as well. These books are perfect to read leading up to Halloween. Night of the Chupacabra by Michael Hebler is out now, and available in all formats.