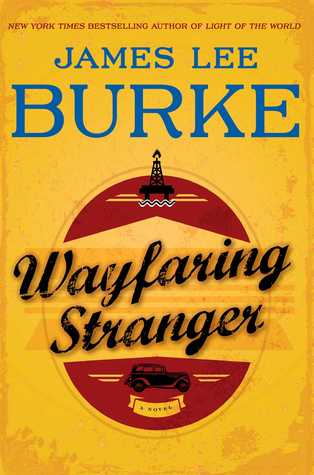 (1). A Bibliophile’s Reverie: While this is somewhat of a conventional interview question, what sparked the idea, originally, for the book, and was the experience of writing it different from your other books?

James Lee Burke: I had to wait over fifty years to write this book. For various reasons, I probably shouldn’t say more than that about its origins.

The era I write about, however, is not intended to be a period piece. I believe the second half of the 20th century has given us the world we have today. Actually, our current situation has its origins in 1914. T.E. Lawrence in his magnificent book The Seven Pillars of Wisdom saw the future. No many have paid attention to his prescience in his work.

(2). A Bibliophile’s Reverie: Now, your book brings up many fascinating bits of information about the infamous criminals Bonnie and Clyde, what research did writing this book involve about their various antics? Were than any surprising aspects of this research?

James Lee Burke: I don’t do much research. Bonnie and Clyde were emblematic figures. The novel is actually about an Arthurian vision of the world. Much of the story has to do with the Song of Roland.

(3). A Bibliophile’s Reverie: Which film director, if authors actually had a choice over such matters, can you see doing the best job with an adaptation of this book?

James Lee Burke: I like this young guy Julian Higgins.

(4). A Bibliophile’s Reverie:Finally, are there are any other book genres that you’d love to experiment with, any historical incidents from the wide world of American history that would be perfect for an exciting thriller read?

James Lee Burke:The great adventure is always at our fingertips. You don’t have to look in other places for it. At least that has been my experience.

Thank you again James Lee Burke for this interview opportunity, and taking the time to answer these questions!

Not every book that you read offers instant literary gratification,and Wayfaring Stranger  written by thriller writing veteran James Lee Burke, certainly fits that description. From the outset of the novel, I was quite immediately wary of the book, and I felt ambivalent about the characters, their particular circumstances, etc. The book begins precisely in the thick of the Great Depression, or the Dust Bowl, in the rural sections of Texas; this is where we are introduced to the book’s main protagonist, Weldon Holland, who feels initially to be the trademark James Joyce character of feeling internally embattled with the fragmented world of the early twentieth century, during a critical period when the dreams and ambitions of the American Dream prove to be illusory in their scope, and very much unethical in their aims.

While the seemingly mythical figures of Bonnie and Clyde appear early on in the book, they appear almost as mirages of the fading world of the great American empire that will never exist feasibly at any time in the twentieth century, especially after two world wars besieged the world at large at this time. In many aspects, James Lee Burke’s apt title for the book Wayfaring Stranger relates to Weldon Holland’s mythic search for coherence and wholeness in identity, as he lives during the decades of the thirties and forties, where things are again progressively fragmented and mired in corporal corruption of some kind,especially in the worlds of the oil industry and Hollywood,two industries that almost serve as symbolic twins of the purveyors of false grandeur and pretension in the post- World War II period of this book.

Even though, this was a book that I initially approached with apprehension, I soon began wading deep into a pool of very complex prose and paradoxical characters that serve many diverse roles. Of course, the novel also contains a very rich narrative that examines the blurred divisions of the reality of  depreciated moral state and cost of the America Dream  and the illusions and myths that sometimes distract the incautious observer, from seeing the corruption that lies beneath the seemingly pretty, polished gloss of a world, trying hard to forget that there ever was either a Great Depression or two consecutive world wars that told a totally different story of the moral state of the twentieth century.

Wayfaring Stranger’s main character is a war veteran of World War II, and his bravery and heroics from the war, really start to fade in their mythic glory, when Weldon Holland returns to Texas, a decade after the era of the Dust Bowl or the world of Bonnie and Clyde. So in many sense, this story is not just a psychological study of how people were perceiving the history of their country, in such a way, that the telescope was showing them both a fragmented sense of the world of the mythic America and the very real, fragmented, 20th century America but a story of how adulthood always involves the slow destruction of our mythologized view of the world. When myths were constructed historically, they were often stories that told a symbolic story of the true history of a certain event, for myths are constructed from the fabric of nostalgic recollections, and the very same happens to Weldon Holland, when the narrative reflects his experience at one point in the Dust Bowl and his almost surreal encounters with Bonnie and Clyde. This part of the story, fittingly, even reads much like the script for a grainy, black and white, vintage western, which only superficially tells that tale of good and evil being clearly defined, and that there is always an explicit purpose for all the events that unfold in our lives.

So in one sense, Wayfaring Stranger, in the way that it cleverly displays the fragmentation of modernity, feels a bit like a modernist novel. But, it is very much a post-modern novel, as it is tackling this fragmentation, and trying to find coherence in the world, which only inexplicably exists during our childhood. While the modernists were very much entrenched in the fragmentation of the world, post-modern novels like Wayfaring Stranger tries to reconcile the change in perspective of morality that it is very much more relativist than black and white like within an older western film, or that the capitalistic titans of the world are really our heroes of this world that are meritorious in the way that their avaricious goals to dominate a particular market, in this book’s case the oil industry, are seen as “good” from an utilitarian  viewpoint, but not necessarily good in a more traditional ethical viewpoint.

There are so many other complexities in both character and plot development within this very deftly written novel, which falls more under the umbrella term of “literary fiction,” more so than “thriller fiction.” Sometimes, the novel was rather interminable to read, especially the scenes revolving around the discussion of the oil rigs, but even these scenes were very important to understanding the deeper layers of what makes this story really tick. It wasn’t a frivolous, lightly enjoyable beach read, it often wasn’t the most enjoyable book to read in a general sense. But, I feel  that this book, just like a William Faulkner novel, that has so much depth, complexity,and skilled writing that it is very, very rewarding for the circumspect reader to both read, analyze, and ponder. This is a work of literature, and that is not a term that I use in a facile way; it is a novel that will be appreciated most by readers that endeavor to read things with a bit more depth and nuance than your typical dime-store paperback thriller.

I’ll be thinking about this book for another two weeks, and maybe I’ll even re-read it eventually, because even if parts of it didn’t immediately grab me. Wayfaring Stranger is certainly the type of literary novel that, much like the novel suggests, wanders around your subconscious in a methodical search for the deeper meaning and significance of this very rich,layered work.