WARNING!! Unimpeded ranting ahead! Tread carefully, if you are a Little Mermaid fan!

Disclaimer: This is two-parts snark, and one-part rant! We all do it at one time in our lives.  I can watch stuff, and still critique it! So, if you love “Little Mermaid” to the point of blind adulation, please overlook this article, look at some silly cat photos!!  Honestly, people need to start having the gall to rant freely at one point in their lives, as long as we understand that it is just our little opinion. I think good, old-fashion ranting in certain contexts can be so gratifying. Unfortunately, we live in a world, where some people treat films and media overall, as some type of infallible holy grail.

By the way, please disagree with me as much as possible too!! This is just my little opinion, nothing more. Also, I am a huge Disney geek!! 😀   We geeks like to analyze things!! That is something I really enjoy doing on Tumblr-reading contrasting opinions on various things. I love the open-ended snark and acerbic humor. There is a loving levity to a lot of what people post on here!! That is something miss in our world, or at least people forget that levity is vital sometimes.

Nonetheless, I really, really hate The Little Mermaid, and I think Ariel may be one of the most obnoxious, vacuous little twit in all of Disney films. You’ll see why, after re watching this, I wanted Ariel to get a Mary Poppins bitch slap. (Yes, Mary Poppins, Anne Shirley, and Emma From Jane Austen’s Emma  are all smarter than this silly little mermaid).

Find out why Ariel and The Little Mermaid now gets on my nerves?

When I was little, I loved “The Little Mermaid.” Regardless of the fact that society tried so hard to dictate to me how men should behave, and whom they should model their behavior after them. I acted naturally glib of all the gender conventions and roles that were implicitly instituted. Did this mean I wanted to wear dresses, and act in a transgender fashion? NO! And, I think that is a very gross misunderstanding of gender roles anyways. The thing I was ignorant of was the fact that men and women somehow were supposed to treat emotions differently. Men were supposed to love characters  in films and tv shows that are broody murderers; lovers of frenetically paced violence w/ hardly any time put aside for introspection . Women were supposed to love the intricacies of relationships and social drama, again without introspection. Basically, both trends of entertainment say that you should love “insipid” stuff, and it is insipid entertainment that always tries to contrive an audience for only one gender.

I always loved things that blurred these divisions; entertainment of depth geared for both genders (Harry Potter, X-men cartoon, Magic School Bus, and The Little Mermaid (until the damn end)/ The Little Mermaid cartoon (better example of feminism)). This is the stuff that I think gains the widest audience, teaches boys and girls to discern past similarities and build more mature relationships with one another.

Mermaid Ariel is awesome, spunky, adventurous; a role model for both boys and girls, alike. Disney, though, have some sinister plans for our tragic heroine.

That is why I loved “Ariel:” the Ariel at the beginning of the movie (to be exact). She dodged sharks to attain a freaking fork; she had a cavern of many treasures that showed that she had a certain anthropological interest in human artifacts. I love that song: Part of Your World, because it it not a love song. It is a plea for a life of discovery, inquisitiveness; a life vested in humanist values. That song resonated with me more than any silly  fundamentalist church song I grew up with (that taught imagination was folly; your mind is worth nothing; you are subservient to the will of an angry, punitive “God” bogey)

Does Ariel want to learn more about the human world, or is that quest subverted by social convention, dictating smart, independent women are to be domesticated by mairrage?

The Little Mermaid enters some very dangerous currents, when Ariel rescues Prince Eric. This is the scene that was a forlorn reminder of what I believed constituted the film’s climax, in what I consider to be a feminist tragedy. After being independent, willful, and spunky, she begins to alter her behaviors. Instead of marveling the anthropological appeal of all the objects in her cave, she begins to become single-mindlessly devoted  to lust, attraction, and reverence for Prince Eric. The boring look of Prince Eric is typified by his  Harlequin black hair, blue eye look.

At one point in the film, she trades her voice away, just so she can silently and coyly gawk at this boring man for a long period of the film. By the film’s end, Ariel is no longer adventurous or curious, she becomes a frigid, stupidly-naive waif. She no longer makes decisions for herself, but instead becomes almost religiously attached to the deity of Prince Eric-the notion of an empty marriage. 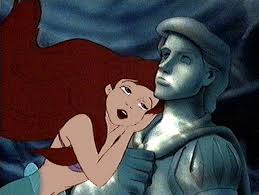 LOOK AT HER DULL, SUBMISSIVE FACE!! “DERP, I LOVE MY PRINCE ERIC DEITY STATUE, DERP” She is not even smiling, it’s just creepy….Isn’t she still only a teenager still? (Ariel turns into Bella Swan, essentially) This is when the object of her desire shifts from want to be part “of the world” for intellectual reasons, and part of your world (to be wedded to someone/subservient to someone else)

Her reward is a sad one. Part of your World is not an anthem about carrying over her youthful, adventurous dream to be an anthropologist in a metaphorical sense. She no longer wants to journey into the world to learn everything. She is enamored far too much to this idea of devoting herself to someone, for what the film implies is youthful lust. The film rewards Ariel with the object of her lustful desires, and she gets everything she dreams for.

Look at this rather weird shift in the two variations of Part of your World:

Look at this trove, treasures untold
How many wonders can one cavern hold?
Looking around here you’d think
Sure, she’s got everything

I’ve got gadgets and gizmos a plenty
I’ve got whozits and whatzits galore
You want thingamabobs? I’ve got twenty!
But who cares? No big deal,
I want more

I wanna be where the people are
I wanna see, wanna see them dancing

Walking around on those
What do you call ’em? Oh, feet

Flipping your fins you don’t get too far
Legs are required for jumping, dancing
Strolling along down a
What’s that word again?
Street

What would I give if I could live
Out of these waters?
What would I pay to spend a day
Warm on the sand?

Bet’cha on land, they understand
That they don’t reprimand their daughters
Bright young women, sick of swimming
Ready to stand

I’m ready to know what the people know
Ask ’em my questions
And get some answers
What’s a fire? And why does it
What’s the word?
Burn

When’s it my turn?
Wouldn’t I love
Love to explore that shore up above?
Out of the sea
Wish I could be
Part of that world”

It even ends with the nondescript “that world,” underlining her need for adventure.

Here is where the weird, problematic shift begins:

Part of your World: Reprise Version (Devolution into a Victorian Waif)

Re-emphasizing something. In this case, Ariel’s repise or reprisal (song-comeback) is to confirm her need to put aside her desire for adventure and intellectual curiosity, to do everything to be with a man she barely knows (only on a superficial level).

I don’t know when
I don’t know how
But I know something’s starting right now
Watch and you’ll see
Some day I’ll be
Part of your world
Okay, the creepy implications of the “reprise” version are found in this version. It’s really kinda troubling especially the

This is not a sign of someone with a mature desire for a relationship. She is willing to sacrifice her willfulness, individuality, anything to be w/ this man (that she barely knows)

And perhaps, I’m taking the “What would I do to see you smiling at me?” bit too far, but that could imply sex without consent, or putting yourself through abuse just to make your abuser smile. Of course, we are supposed to accept Prince Eric is too dumb/one-dimensional to be abusive, but it’s still an unhealthy desire for a woman to put all her needs and self-definition/ dignity aside for love.

The scene where Triton destroys her cave of “wonders” is the moment Ariel completely changes her personality. In the Little Mermaid sequel, Ariel looks like a dejected housewife, and I really abhor that film for that reason. Disney Channel once created a Little Mermaid cartoon, where Ariel remains adventurous, almost as atonement for their anti-feminist ending for the film.

I hate that finale scene, where Triton literally gives her a silly, frivolous dress with sparkles. It screams: “Look, I’m just a Christmas gift for my husband; I symbolically am the dowry being passed from father to husband”  Everyone sings, and no one questions the tragic loss of Ariel’s willfulness and inquisitiveness at the film’s beginning. As a young boy, I hated this Ariel: this stupid, cossetted, married Ariel. She lost her adventurous spirit.  How can guys relate to a female character that has no personality? Is this why feminists cannot stand characters of this type?
When Disney slyly changes the object of Ariel’s desire from something intellectual to something lustful, they are implicitly sending the message to women that your childhood dream of transcending gender conventions is short-lived. This is such a sad message for both men and women, in a world where young boys and young girls are being taught at an early age that their gender (by directive of religious or societal forces) guides how they act. That their experimental phase of curiosity is only short-lived. Your inquisitiveness is a transitory idiosyncrasy.

Thankfully, Disney is changing for  the better with Frozen; both male and female characters are finally be celebrating for their unique differences and the notion of children prizing imagination and other humanist values is being upheld!!!  It’s a pity that my generation grew up with such a terrible film, like “The Little Mermaid” to tragically see our hopes and dreams be dashed by the intervention of social convention/conformity. It’s a pity that Disney always feels a need, with these films, to somehow restrict the intended gender viewership of this movie. (How can men relate to Prince Eric, when is so damn boring?? Alas, he is a stupid Harlequin shell of men: a mere object of lust)

I’ve never watched the new My Little Pony, but the trend of boys and girls enjoying it is a sign of very good social progression!! We are finally seeing our shared humanity. Creating characters of depth with both genders helps boys identify with possibly some female characters, and girls doing the same with male characters, vice-versa. The bottom line of my argument is a more egalitarian-focused feminism, not about one gender being wholly different from another (like a whole seperate alien spieces) But, a more Quaker approach to gender (the Quakers get so many things right) that recognizes our commonalities as human beings.