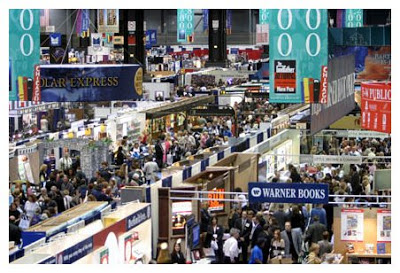 Every year, BEA is greeted with the same unadulterated fanfare, and a long slog of a sleepless night during the evening prior to the event. For this year, I decided only to attend Thursday because, to be quite frank, Book Expo America normally overwhelms me and expends every last ounce of energy that I paradoxically exerted being excited about prior to the event (can someone please explain this weird adrenal phenomenon?) Anyways, the best way to convey just how exciting this year was is by writing up highlights. Unlike book reviews, this type of writing can become very taxing for me, as I hate  summarily writing a bunch of of things that happened this year in chronological details. It is far easier to discuss certain highlights piecemeal both for the sake of your sanity and my own.

Yes, I interviewed a computerized AI monster with the eccentric name of “Gugor.” It was really quite a lot of unexpected fun. My notes were very disorganized and haphazard to the point, where I cannot even come up with an accurate transcription of how the interview went between Gugor and myself this past Thursday at the Penguin’s fantastic BEA display for  The Creature Department,  written by Robert Paul Weston.

Anyways, I can say confidently  that Gugor has some apprehension about being in a musical, mostly due to being semi-self conscious about the whole business surrounding musicals and  unease with singing. For now, his first feat as a public figure will involve starring in this upcoming book. By scanning the below synopsis, you’ll see that his upcoming adventure in novel format will be something to look out for, from Penguin, this upcoming Fall. I’ll definitely have more information to provide readers about this exciting project in the future.

“    About The Creature Department: Elliot and Leslie visit their Uncle Archie inside the glass and steel towers of DENKi-3000, the world’s fifth or sixth largest electronics company. They’ve heard rumors about a creature department hidden somewhere inside and they beg their uncle for a look. And it’s unlike anything they’ve ever seen! They meet creatures with wings, creatures with tentacles, creatures with horns, creatures with three heads, creatures who are nothing but head, and even a couple creatures with extremely unmanageable hair. Elliot and Leslie become friends with these hilarious creatures. And then Uncle Archie disappears and the menacing Chuck Quickweather arrives with an announcement that he is going to streamline DENKi-3000 and discover its secret. Elliot and Leslie must team up with the ringleader of the creatures: Jean-Remy, a remarkably perceptive Parisian fairy-bat with sartorial flair, to motivate the creature department into inventing something incredible that will save them all from Quickweather, his evil henchmen, and downsizing.”

Interestingly enough, our conversation began with a conversation about Gugor’s favorite vampire character. He ecstatically began acting out Nicholas Cage’s hilarious scene from the film,     , where Nicholas Cage stars as one of the campiest vampires out there. Just, how frightening is Nicholas Cage’s “I’M A VAMPIRE, when it is spoken without any gravitas whatsoever!”


If Nicholas Cage can star in campy films like Vampire Kiss, I reassured Gugor that he’d be fine, potentially starring in a future Creature Department film as himself. Perhaps, if The Creature Department  gains enough interest upon its release this fall, Gugor may very well be on our movie-screens in a short after a release that hopefully won’t prove cataclysmic in the wrong sense of the word.

I wish all my readers had the chance to have the fun opportunity to interview an AI monster that is exceedingly smarter and more friendly than the inferior being named “Cleverbot,” who has been fairly popular among internet users for far too long. Perhaps, his ingenious marketing and publicity team will have him tour nationwide, giving readers the first true interview with a fictionalized character that otherwise is limited only to the pages of the upcoming book.

Eventually, the website for the book (www.thecreaturedepartment.com) will feature a downloadable App that will enhance the reading experience, and bridge the technological gap between the page and the latest technology that is available on both e-readers  like the Kindle Fire and tablets like the IPAD or the Google Nexus. While this book is being targeted for the  children’s fiction market , I am not the first to admit that most of these books have very wide appeal (For example, Harry Potter readers range from the ages of five all the way to, most likely, 100 years old). Interestingly, the visual effects studio, Framestore, that created Dobby in the Harry Potter films and other CGI creations from films like The Golden Compass  are the ones responsible for creating some of the awesome visuals for the planned Creature Departments App in the future.

Lasting Impressions: As evidenced by Penguin Publication’s The Creature Department,  publishers are becoming far less apprehensive about the advent of the latest technology, and clever seeking out ways to optimize the latest technology to provide a new dynamic reading experience for the newest generation. Personally, I have seen nothing but more interest in reading overall due to technology. .With The Creature Department, the planned App and the sheer cleverness of the book itself might help younger readers feel more enticed to read and gain much more enjoyment out of what they are reading. Believe me, this is not the last time you’ll be hearing of either Gugor or The Creature Department  on this blog.

Highlight B: Brandon Sanderson YA books

When it comes to fantasy fiction, I veer more towards Brandon Sanderson’s books more so than George R.R. Martin’s book. If I were go into my reasons, I might end up inciting a mad hive of debate, and I feel that would be disingenuous to the marked differences between the types of writers that Brandon Sanderson and George R.R. Martin are (both competent writers with very different writing styles and story interest). I’m a huge fan of Brandon Sanderson’s past works like the wildly creative, Warbreaker,  and the truly epic Mistborn series. His long-spanning series (well, there is only one book thus far, but there is bound to be more in the future), the Stormlight Archives, begins with truly dynamic characters and some of the best writing in recent fantasy fiction. In my personal opinion, a lot of fantasy books are extremely ponderous. The problem that plagues many fantasy books is this excessive dumping of exposition in many fantasy books that is not cleverly done, and just makes the reading experience become as laborious as paging through a textbook about Elementary Physics.

Being extremely judicious with my fantasy fiction, I have admittedly read very few adult fantasy books, and this is a very hard admission to make. There is a lot of very strange pseudo-psychological rhetoric that wants to diagnose readers like myself, as being ADD. Except, I think people, including myself at times, seem to lapse in remembering that  readers have varying tastes, and no one should ever feel obligated to either enjoy or like a book just for the sake of conforming to popular expectations. Personally, I am sometimes both thrilled with the popularity of Game of Thrones, and extremely annoyed at times. There has been a truly discouraging trend going on, which revolves around some people insisting that people, interested in the fantasy/scifi genre, should only read Game of Thrones, as it is purportedly the only well-written fantasy book out there. I think this comes from a very fervid, elitist minority of fans. But, I have heard some other disenchanting things from people I know, who show no interest in the series due to the strange, hostile behavior of fans.  Most fans aren’t like this, and many of them are huge fans of the other books in the genre that are written with varying writing styles. That is why I like fantasy fiction because there is truly an inherent variety in the genre.

The popularity of Game of Thrones  is the perfect opportunity, though,  to show newcomers to the genre just how diverse the market is, even if some of the aforementioned elitists wish to dissuade people from exploring other titles. Brandon Sanderson was really the first author to make me understand the mechanics of magic systems, see that action sequences can be written without feeling interminable, and having exposition that is actually integral to the plot. Instead of seeing Patrick Rothfuss, George R.R. Martin, and Brandon Sanderson as vying for the iron throne, we should see all three as equally competent fantasy writers that meet the needs of different types of readers, who have varying interests.

Personally, I have found Brandon Sanderson’s style to be my favorite though among the three most recognizable faces of fantasy fiction right now, and I think it is the witticism in his dialogue that seems completely missing in  the more rough and serious Game of Thrones. That is the reason I waited nearly two hours for Brandon Sanderson’s signing for The Rithmatist,  which has a magic system that revolves around chalk. I knew, in advance, that this book, and Steelheart that I received at a later signing would offer me hours of endless entertainment without the agonizing periods of boredom that greet me during  reading some other fantasy books. Of course, authors like Maria V. Snyder, Jon Sprunk, DB Jackson, and several others have helped make me reconsider all these limiting  preconceived notions that I have about fantasy fiction.

Lasting Impressions  I keep making some lazy assumptions just because I haven’t gotten around to other author’s books in the genre.  Anyways, the main point of the above rant was to drive home my point that it is important that we civilly discuss books with other people in the spirit of knowing that everybody loves different books. There is no one series that is magically the single best fantasy novel.

Having seen the excitement people have for The Rithmatist  and Steelheart has shown that HBO’s Game of Thrones  has above all convinced large numbers of people to delve into a genre that does have its thorny side. Personally, I hope to review both titles in hopes of highlighting just how versatile in style that the genre is, and how Brandon Sanderson contributes to a growing YA market that also is much more diverse than the stereotype of it predominately being mostly Paranormal Romance books.
Thanks to all the bloggers and other fantastic people I talked to at BEA!! Tomorrow, reviews will return as usual. Sorry for the delays, as of recently, with my reviews!