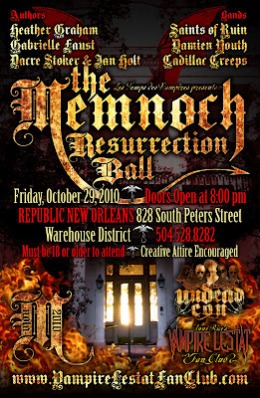 Guest Post Written by Suzie Q. (President of the Official Anne Rice Lestat Fan Club)“This is Suzie Q., President of the Anne Rice’s Vampire Lestat Fan Club.  I would be happy to contribute a blog for Anne Rice Fan Month.  I was Anne Rice’s first secretary when she moved back to New Orleans in 1988.  I met her at the Queen of the Damned booksigning back in October, 1988.  As we waited in line, friends Susie and Teresa and I discussed starting a fan club for Anne Rice.  She said “Lestat would love to have a fan club” so we collected 30 names of those left in line at the bookstore.  The fan club went on till 2000 with 1,000s of attendees at the annual Ball or Gathering of the Coven as we called it.  In 2002, I started holding the Ball again after listening to people complain about not having anywhere to go on Halloween weekend.  After Katrina, I was unable to afford putting on a huge Ball so I started up the fan club again.  Now we have moved to larger venue due to increased attendance and I also started the Undead Con, a conference where authors can network and we can learn about their books.  This is my third Undead Conference with Guest Author Sherrilyn Kenyon.  You can see the entire lineup on our website, www.arvlfc.com.”

Thanks Suzie Q., and if you’re interested in seeing live updates from the group, they do have a Facebook page that you can check out!