YIKES.. Bella Swan’s twin sister has her own movie……..

More Spoilers follow, if you don’t mind them.. Read On. If you are fearful of snarkiness, avoid this review at all costs…

Sigh… so the snarkiness resumes with a certain film that has been perverting my mind and driving me to insanity. Yes, the movie has literally posed itself as the bogie of all my worst nightmares about whiny, static characters. Even more gruesome, this movie serves to validate this obdurate character’s poorly developed depressive state, and people who authentically suffer from depression or other mental illnesses may be wondering if this movie is championing the wrong outlook on such horrible conditions. Knowing people who suffered from a debilitating depression once or more in their life, I thought the portrayal of depression was very unrealistic and sorta offensive. Also, this movie just stinks to high heaven of overdone pretentiousness that one might wonder if the director himself just inserted himself into Kirsten Dunst’s character’s body just to prove to audiences that depression is not a deterrent in life, rather its a transcendent state that makes us lucidly aware of nihilistic state of the world. That’s right, the message of this movie, the suicidal mindset is the most logical mind; they are the geniuses that know with certitude that there is nothing beyond death.
Does anyone really legitimately think that this is profound? Its just the teenage emo anthem being enshrined in an Indie-film that reminds us that this really is the best and only “logical” perspective one can have of life.

(The movie’s first attempt to kill Justine, who I’m calling Bella’s more obstinate twin. You can totally see the parallels with Opehlia’s iconic drowning scene in Hamlet… See the flowers!! Now, can’t you see that this movie is something to be taken seriously!)

When you create stories, no character should be exclusively favored, and their negative choices should never be validated. This movie literally has blind adulation for the main character Justine, who suffers from a debilitating depression; a depression prolonged by the director’s manipulation of the film’s events to condition her into believing that depression will ultimately help us get what we want.  From the beginning, we are thrown carelessly into a sequence of Justine, the bride to be who plans on marrying Alexander Skarsgard/ the vampire in True Blood  that everyone seems to lust after. (Straw Man 1: The person who wants Justine to be happy, not depressed)

Well ladies, Justine is not an Alexander Skarsgard fan. At her wedding, she makes dozens of attempts to escape him. After they’re finally married, she even deceives the poor guy into thinking that she wants to have sex on her wedding night. No, she’s far too intellectual and manically depressed to know what happens to women that go for Alexander Skarsgard, so she leaves him alone with his trousers down on their wedding night, and instead has sex on a golf course with another man on her brother’s estate property. This guy that she chooses over Alexander Skarsgard, her own lawfully wedded husband, is nothing but a minion of her boss at the advertising firm. What is her beef with her boss of the advertising firm? Well, he is kinda “swarmy,” but he is also wondering why she’s been unproductive recently. Its a valid concern  for other characters, but not the infallible Justine. She knows better (as the film keeps implicitly telling us…..) There is a reason why she hinders the company’s progress… She’s ideally depressed, and above such orders… 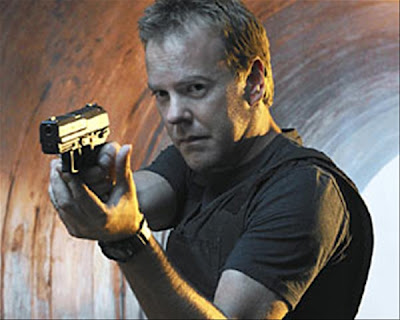 (Straw Man 2: The scientist, who is blithely unaware of the intellectual superiority of the depressed Justine. Hey Doc, Try a dose of Justine’s Nihilism… It’d make you smarter/supposedly more developed..)

Jack Bauer (just the actor that portrayed Jack Bauer I mean…) happens to be Justine’s brother, who forbids to tolerate any shit from Justine. From witnessing the petty arguments that occur within Justine and his parent’s marriage, all due to his highly-intellectual mother’s depression problems, he tries to intervene in the film and talk sense into Justine. Of course, since the film is constructed to favor Justine, the brother is developed in a contrived fashion, developed thinly as a nasty bastard/brute, who just frustratingly seeks to help his sister recover from depression. Again, the film raises Justine and her mother on such a high pedestal that her own brother is poorly developed; he’s nothing but a straw-man of all those ignorant, logically-minded scientists guys (yes, Jack Bauer is a scientist in this movie) who just fail to understand the superior intelligence of the film’s depression demi-goddess-Justine.  Justine’s husband acts the same way, he’s seen as being very pathetic because he has even less appreciation for Justine’s divinely protected depression: Why can’t he understand that there are reasons, beyond his feeble mind’s grasp, that she has to commit adultery on her wedding night? Why? She is depressed, and has special insight into the supposed moral justifications for such an act…….. (Moral ramifications for Justine’s poor moral choices are never brought up in this film.. It might distract us from having blind reverence for the Goddess, Justine= a character who can do no wrong, but has proved otherwise with all her terrible choices) I actually really liked Jack Bauer’s wife, who was very endearing and artistic. Of all the crop of poorly developed straw men, she is the one straw women, which even the director stunningly allows to show more layers than that monstrous bitch, Justine. Again, the film will not be succored into allowing her to tempt Justine away from fully engaging with her divine depression. Her artistic inclination keeps her from fully admitting to the nihilistic reality of the universe. When the film ultimately (and literally) commits suicide by the end by caving in on itself (via a CGI planet called Melancholia, named after Justine’s holy condition), we are left feeling grief for the woebegone, kind wife of Jack Bauer who was forbidden to listen to Beethoven’s Ninth Symphony before the planet, Melancholia, destroys the Earth only because Justine insists that its “frivolous” and a complete “waste of effort,” when we’re all going to be goners anyways. In a weird twist of fate, the herione/Jack Bauer’s wife accordingly becomes the villain, forcefully by the film’s sheer effort to protect Justine’s godly reputation. In the end, the film has nothing but spite for those New-Age artists like Jack Baeur’s wife, who dare to earnestly seek out the goodness of life. The film literally kills off all the characters who seek to help Justine recover. In my life, I’ve never seen such a manipulative film of such grand, pretentious proportions as this one….What makes Justine so special? She sobs incessantly, much like a nineties baby doll. Her deep depression earns her special rights to being highly favored by the director. Nothing must detract from her divine state, even if all the other characters are poorly developed as evil, optimistic villains.

(Straw Man 4: The Abused Horse. Subliminal Message: Its okay to recklessly beat horses, as long as you’re depressed. Justine is a holy saint, and the horse shall be beat if she believes he is trying to make her “happy.”)

In the film, the sentimental villian AKA. Jack Bauer’s wife, before the film commits suicide (divinely willed by Justine) tries futilely to make despondent Justine happy once more. Like in all happy trite horse films where animals bring bliss, this horse should have forced some sense into Justine’s head. No, the film is sure to make PETA members indignant because Justine becomes restive with her horse, and its mystical powers that try to infect her with happiness that might make her unintelligent. Earning the film’s consent, she ruthlessly beats the horse. At this point, I shied my eyes away, but the horse is never depicted as a victim of Justine’s sadism. Instead, the horse is killed summarily because the horse had dangerous ulterior motives.
Moral of this movie: Anyone who wishes to help Justine convalesce from her depression fails to understand her ideal depressive state. She is supposedly the only one in the film worthy of protection from natural consequences, and her film must contrive itself to only worship her. Anyone who dares has the audacity to keep her depression from being celebrated will quite literally be punished?

BEWARE… More spoilers than before below…

(Straw Man 5: The Film/Art Itself that dares to seek out impossible meaning in a nihilistic universe)

Yes, the film stunningly commits suicide because Justine in the end proves that  even this film or any kind of art that purports that there is always the possibility for meaning in this universe is worthless. On Justine’s divine command, the film starts to destructively cave in on itself and seeks to destroy what little meaning the film ever even tried to seek initially. In the end, I was left laughing hysterically because nothing can get more deceptively pretentious than to have the movie destroy itself, and throw any constructed meaning into an oblivion. By the end, the audience is left wondering: What is the point? If Beethoven’s Ninth Symphony is an act of unholy sentimentality, why even bother to create art, vie to find tangible meaning in a paradoxical universe? No, the filmmaker is duplicitous  and uses this movie to validate his own depression issues, and force us into recognizing that people with depression are inherently more sensible and smarter. It would be better supposedly if everyone had depression; we should allow people to commit suicide because they are ideally the smarter, more rational ones…

By having this film serve as a manipulative sermon about the intellectual advantages of depression, and how  depression sufferers should not try to recover from it, there is no substantive meaning whatsoever in the end. We are left feeling used and completely horrified by indecent way that this film eschews consequences only to worship one character with depression, who is a straw-woman herself within a film of poorly developed straw-women/men all coercing us to believe that life is useless. No characters are developed and when some seek to assert their depth, like Jack Bauer’s wife, the film punishes them, while Justine makes all sorts of bad decisions with impunity.  In the end, I cannot help but hate this movie, and wonder why this movie is heralded by so many people… its nothing but a emo kid’s “dream come true..” In that scenario, the supposedly ignorant parents and guidance counselors would be killed…Oh well, film watching is a subjective experience………(Phew… Long Rant…)

Certainly, Kirsten Dunst’s childhood vampire incarnation agrees with me: This film is tortorous.. 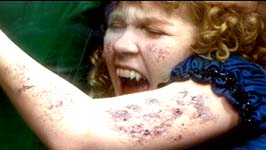