First off, I believe a Happy Thanksgiving is in order. HAPPY THANKSGIVING!! There, I defied my grammatical rules and actually used the internet tactic of highlighting  your words with unnecessary capitalization.   Anyways this post will be short because I’m only outlining the various steps you can take to continue waging a pacifistic, verbal war against the evil, Wolfram and Hart (Warner Bros.) who are permitting our dearly beloved Buffyverse to be trifled with. Remember to check out previous posts for more details though I’ll be repeating some of the same steps again. For some reason, repetition is necessary with something as important as fighting corporate foolishness. That’s right! Wolfram and Hart, we will not allow you to trespass upon Buffy and defile it. We will never reward you with money for your treachery!!!
Here are some wonderful steps you can take to stop the Buffy Reboot from happening:
1. Do you have a Twitter account? If so, include Buffy reboot campaign messages and place “#nojossnobuffy” somewhere in the message. This is the universal code for our Twitter campaign against the Buffy Reboot. All the Buffy fans are in hopes we can make this a trending topic sometime in the near future.
2. I know many of you subsist on the diet of Facebook daily. So instead of reacting with alacrity to distress messages about broken relationships. Use that alacrity to share information about the campaign on nearly all the pages on Facebook including your own. Of course, you should also join the “I’m with JoJo..” Facebook page:
****Be reminded that you only have to click this picture to bring up the page.****

One Last, Special Campaign Activity: Wishing Wolfram and Hart/Warner Bros. Happy Thanksgiving while sharing our lack of thanks for Allowing the Buffy Reboot!!!
****Acess Warner Bros. Picture’s Facebook fan page wall by clicking HERE.
Once there, share your frustration packaged with season’s greetings. Meaning, leave them a Happy Thanksgiving message and follow it with a message that details you not being thankful for their decision to allow for the Buffy reboot to occur.
Leave similiar messages on their Twitter. Always start those Twitter messages with @wbpictures to have them sent to the right people.
Equip yourself with anger disguised as cheers and propriety! Be head strong even if others look upon you with confusion and disgust. In the end, we could unitedly stand against the Buffy Reboot and wipe its potential existence from the face of the Earth and the myriad of demon dimensions!!!!! We will walk through the fire!!
One last, season appropriate promotional Campaign picture: 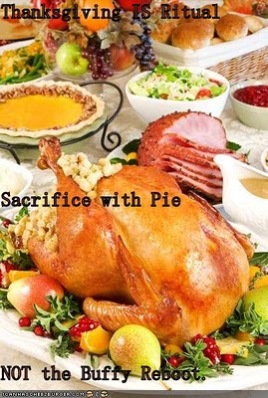