Synopsis (Taken from Amazon Product Detail Page):
“In my dreams, I saw a city fall into the sea. I heard the cries of thousands. I saw flames that outshone the lamps of heaven. And all the world was shaken . . .” –Anne Rice, Prince Lestat and the Realms of Atlantis

At the novel’s center: the vampire Lestat de Lioncourt, hero, leader, inspirer, irresistible force, irrepressible spirit, battling (and ultimately reconciling with) a strange otherworldly form that has somehow taken possession of Lestat’s undead body and soul. This ancient and mysterious power and unearthly spirit of vampire lore has all the force, history, and insidious reach of the unknowable Universe.

It is through this spirit, previously considered benign for thousands of vampire years and throughout the Vampire Chronicles, that we come to be told the hypnotic tale of a great sea power of ancient times; a mysterious heaven on earth situated on a boundless continent–and of how and why, and in what manner and with what far-reaching purpose, this force came to build and rule the great legendary empire of centuries ago that thrived in the Atlantic Ocean.

And as we learn of the mighty, far-reaching powers and perfections of this lost kingdom of Atalantaya, the lost realms of Atlantis, we come to understand its secrets, and how and why the vampire Lestat, indeed all the vampires, must reckon so many millennia later with the terrifying force of this ageless, all-powerful Atalantaya spirit.

I’ll keep this as brief as possible, since many of you fervid Anne Rice fans, who may have been veteran fans since 1976 (the date of the release of the seminal Interview with the Vampire) are probably more interested in knowing just how to enter versus the stipulation of rules/terms/conditions. But both are necessary to make this giveaway of an exclusive ARC of Prince Lestat and the Realms of Atlantis as smooth and fair as possible.

First off, I want to thank the Knopf Marketing and Editorial team who kindly sent about 20 total Advance Reader Copies (“ARCs”) for an exclusive giveaway through both here and the infamous Facebook Fan Group for fans of Anne Rice’s Vampire Chronicles,  the Lestat Book Coven. Since its launch in early March, 2014, we have been lucky enough to amass a group of 3,800 bright ,eclectic fans of Anne Rice’s books; this group was created at first to celebrate the momentous relaunch of the Vampire Chronicles with the release of Prince Lestat, a paradigm-shifting novel that thrilled both new and old fans of the Vampire Chronicles series.

Before unveiling the Rafflecopter App, which is what is being utilized for contest entry purposes, I do have a few stipulations, so please bear with me.Randomly selected winners of this contest will be receiving an Advance Reader Copy of the forthcoming Anne Rice novel Prince Lestat and the Realms of Atlantis prior to the book’s official release on November 29,2016. There are a total of 16 copies being given way. For transparency purposes, the four other copies were procured by both myself and the three other administrators for the Lestat Book Coven, in exchange for their voluntary hard work that has preserved a certain measure of civility on our very popular Facebook page. We all are held to the same ethical policy that will govern this whole contest, so please note that having an Advanced Reader Copy of any book, particularly one as popular and in high demand as Anne Rice’s new Lestat title, is a special privilege. And certain things do need to be adhered to when undertaking this responsibility:

(b)DO NOT SELL ADVANCE READER COPIES ON EBAY PRIOR TO PUB DATE: Or any resale site for that matter, especially before pub. date. It is that window of time, though, that concerns me most. It is deeply disrespectful and immoral to take advantage of the high market demand of a title, prior to its clearly publicized sale date, by selling this type of copy (that has no intrinsic resale value) in advance of a release. It is unfair and disrespectful to not only Random House/Knopf Publishing House, who kindly offered these as a prize to fans, it is also disrespectful to myself, since selling an Advance Reader Copy prior to its release is wanton abuse of this privilege. So anyone found to have sold their ARCs through third-party resale websites will be blacklisted from entering any contests on this blog, as well as being a member of the Lestat Book Coven. If you are a present member of the group, found to be selling your copy prior to pub. date (November 29,2016), you will be banned without any appeal. After pub. date, you are free to sell wherever you feel inclined to sell it. IT IS BEFORE, NOT AFTER, PUB DATE that is the major issue, as you are taking advantage of the book’s limited availability and hype for profiteering purposes.

(c) DO NOT RECKLESSLY SPOIL THE BOOK’S CONTENTS ON SOCIAL MEDIA: Social media can be Pinterest, forums, Tumblr, Facebook, Twitter, or on the Lestat Book Coven Group. If you are doing this privately through email and different variations of private messaging available through these sites or forums marked with explicit Spoiler Warnings, then you are good. If you have received a book early and wish to discuss you, we will be providing a special private Facebook chat room for those wishing to discuss the plot; this is one of the perks of winning an Advance Reader Copy, but you can easily lose these privileges by committing the aforementioned rules.

(d) Due to security concerns about shipments, THIS OPEN IS ONLY OPEN TO RESIDENTS OF THE UNITED STATES. The sixteen USPS priority mail packages, each with tracking numbers and package insurance, have already been purchased, so no exceptions will be taken to this rule. Our international readers are highly respected and appreciated both here and on the coven, so please understand the reasons are not personal nor even having to do with price (international shipping costs can be exorbitant).  Unfortunately, different countries have different custom regulations, and of course, there are varied international contest laws, all of these things may pose serious conflicts with trying to ship prize-winning books out to those in certain countries. And we wish not to engage in prejudicial choosing of certain countries with favorable international contest laws. So it is easier to restrict the contest to those in the U.S. only, to ensure that those that win receive the prize that they have fairly won.

Here are some other mandatory guidelines that have to be added. No Purchase Necessary. Winners are selected at random, and must be residents of the United States for reasons described above. If you choose to review this title, please be sure to disclose you receive a copy as part of a giveaway, but this fact does not influence your unbiased feelings on the book.  Neither WordPress, Anne Rice, or Facebook are affiliated with this contest nor carry the responsible for maintaining or preserving it. Selection of winners and shipment of packages is solely our responsibility: both myself, the chief administrator of this blog, as well as lead administrator of the Lestat Book Coven. Note that by entering this contest, you are not a guaranteed winner; winners will be selected at random by the Rafflecopter APP. The algorithm of the app does make it so that more entries increases the probability of winning, but does not ultimately mean you will win.

WITHOUT FURTHER ADO, residents of the US (includes both U.S. Virgin Islands and Puerto Rico) are open to entering  this giveaway by completing the various tasks available through the Rafflecopter widget below. For some options, you may enter once per day, but for most, you only need to complete the assignment once and be done with it. If you should have any questions, concerns, or problems with the widget below, please feel free to message me at narniafanatic@gmail.com, or lestatbookcoven@gmail.com. I’ll try my hardest to answer any emails, though it may be later in the day in my time-zone that I get around to your email, so it is recommended you email lestatbookcoven@gmail.com for quicker responce.

Using this APP should be pretty self-explanatory, sign through with either email or Facebook, and complete the different tasks to increase your likelihood of winning a copy. And again, please again note only residents of the US can enter. Those who enter with an international mailing address will be disqualified.

BY THE WAY, here’s visual proof of the Advance Reader Copies in question (again, kindly sent by Knopf Publishing Team, a subsidiary of Random House Publishing aka. Penguin Random) 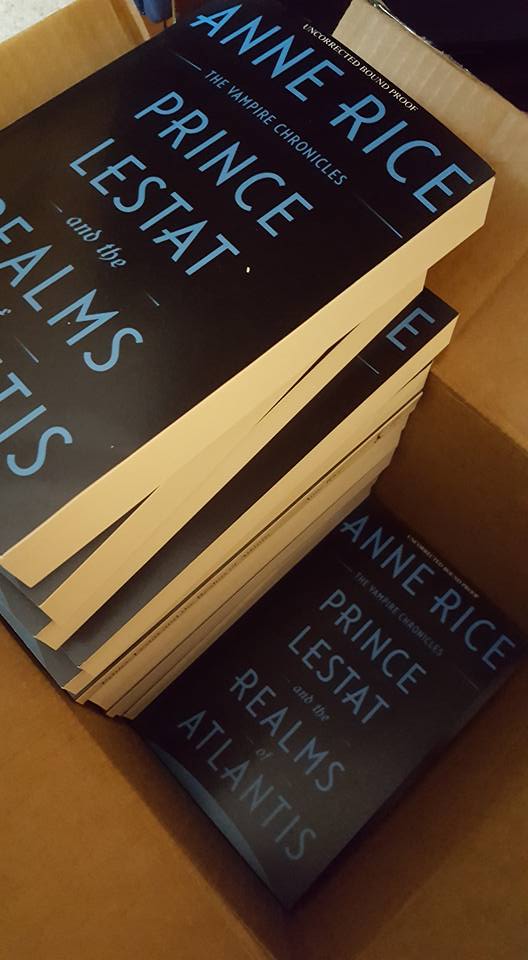 You have till 11:59pm. Saturday September 24,2015 to enter for your chance below to win one of sixteen total Advance Reader Copies of Prince Lestat and the Realms of Atlantis. Winners will be selected randomly by the APP at 12:00am, and will be notified at that time, and all books will be mailed out by that following Monday, and delivered that same week. I will notify the winners privately through email at 12am-12:30 am. next Sunday. May the luckiest vampire win!

UPDATE 9/18/2016: The Rafflecopter widget is not fully optimized on here, which is something I’m working right now on trying to rectify. For the time being, please click the Lestat image below to access the Rafflecopter Widget.

Or try clicking this other picture of the sixteen ARCS being given away, both take you to the same exact place..