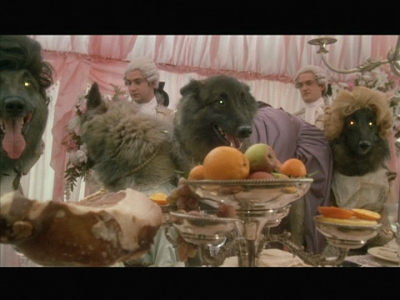 By now, I’m fairly certain that all my readers are more than abundantly aware of my Anne Rice fandom. If not,its very easy to peruse through my cache of past posts, and evidence my fervent appreciation for both her novels.

As a huge fan of her last novel, The Wolf Gift, I am extremely excited for the planned sequel/companion novel: The Wolves of Midwinter. The novel appears to closely follow the narrative coattails of the previous installment, and more tantalizing details about the werewolf mythos within Anne Rice’s fictional world will definitely be divulged against the backdrop of Christmas in Nideck Point. Hopefully,  werewolf Yule tide celebrations won’t be as placid as say- the Charlie Brown Christmas festivities. More importantly, the celebration will probably include some fattening eggnog, an extravagant/gluttonous feast, and more  thoughtful philosophizing on the nature of morality and ineffable nature of God/divinity.

“The tale of THE WOLF GIFT continues . . .In Anne Rice’s surprising and compelling best-selling novel, the first of her strange and mythic imagining of the world of wolfen powers (“I devoured these pages . . . As solid and engaging as anything she has written since her early vampire chronicle fiction” —Alan Cheuse, The Boston Globe; “A delectable cocktail of old-fashioned lost-race adventure, shape-shifting and suspense” —Elizabeth Hand, The Washington Post), readers were spellbound as Rice imagined a daring new world set against the wild and beckoning California coast.Now in her new novel, as lush and romantic in detail and atmosphere as it is sleek and steely in storytelling, Anne Rice brings us once again to the rugged coastline of Northern California, to the grand mansion at Nideck Point—to further explore the unearthly education of her transformed Man Wolf.The novel opens on a cold, gray landscape. It is the beginning of December. Oak fires are burning in the stately flickering hearths of Nideck Point. It is Yuletide. For Reuben Golding, now infused with the wolf gift and under the loving tutelage of the Morphenkinder, this Christmas promises to be like no other . . . as he soon becomes aware that the Morphenkinder, steeped in their own rituals, are also celebrating the Midwinter Yuletide festival deep within Nideck forest.     From out of the shadows of the exquisite mansion comes a ghost—tormented, imploring, unable to speak yet able to embrace and desire with desperate affection . . . As Reuben finds himself caught up with the passions and yearnings of this spectral presence and the preparations for the Nideck town Christmas reach a fever pitch, astonishing secrets are revealed, secrets that tell of a strange netherworld, of spirits—centuries old—who possess their own fantastical ancient histories and taunt with their dark, magical powers . . .”

Sadly, we only have the upcoming paperback release of The Wolf Gift  next Tuesday  to tide us over till later this year, October 2013 to be exact, when this very exciting new installment is released. Until then, we’ll have to brace ourselves for the long interim between now and then. In order to prevent everyone from getting edgy and slightly wolfish, I have some upcoming posts to help stave off your impatience and to take advantage of the time till then to plumb the rich literary depths of The Wolf Gift (It helps that I’ve been doing a thorough reread of both Interview with the Vampire and The Wolf Gift once again to help refresh myself of the various nuances in Anne Rice’s character development and plot structure of both novels.)

Strangely enough, a short 16 paged preview of “The Wolves of Mid-Winter” is available on Amazon’s free-reader preview, and you can access this preview only through the product page of The Wolf Gift  paperback. Its only fully-accessible for Amazon members only, and you just have to scroll towards the bottom of the actual preview to view it in all its glory!

* Discussion of The Wolf Gift Part 1:Archetypal Elements of the Hero Story, as outlined by Joseph Campbell
*In-Depth Review of Anne Rice’s The Wolf Gift

Be on the Look-Out for more discussion posts on The Wolf Gift  in the coming months!