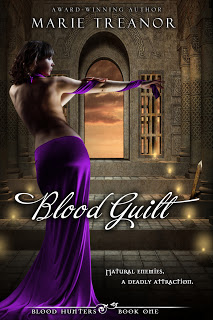 By Marie Treanor
eBook coming 5th June 2012
The first of a new vampire romance series, a sequel to the Awakened by Bloodtrilogy.
Natural enemies, deadly attraction…
Mihaela, a fearless vampire hunter secretly haunted by loneliness and childhood tragedy, finds it difficult to adjust to the new world order where vampires are not always the bad guys. She’s taking a much needed vacation in Scotland when she sees a little boy being chased through the streets of Edinburgh. Rescuing him brings bigger problems – two vampires from her past: Gavril, who killed her family; and the reclusive and troubled Maximilian, gifted Renaissance artist and one-time overlord of the most powerful undead community in the world. Maximilian once saved her life and now needs that favor returned.
The earth moves for Mihaela in more ways than one. From Scotland to Budapest and Malta, she  races against time to prevent a disastrous, vampire-induced earthquake and save an innocent yet powerful child – all while fighting a dreadful attraction to Maximilian, her only ally, whom she can’t afford to trust. For Maximilian, the hunter becomes a symbol of renewed existence, as he struggles to accept his past and rediscovers his appetite for blood and sex – and maybe even happiness. 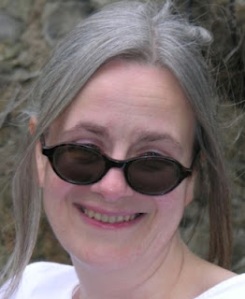 Marie Treanor lives in Scotland with her eccentric husband and three much-too-smart children. Having grown bored with city life, she resides these days in a picturesque village by the sea where she is lucky enough to enjoy herself avoiding housework and writing sensual stories of paranormal romance and fantasy.

Interview with Marie Treanor
MT=Marie Treanor FF=Fantastyfreak
1. FF:While I know this has been probably asked millions of times, What about vampires intrigues you?

MT:I don’t mind being asked again. I ask this of lots of other people too! For me, it’s a combination of things. Partly, their different-ness. Although they look like humans, they aren’t, although they may magnify certain attractive aspects of humans: male strength, sexuality, beauty, protectiveness etc. They’re more powerful than mere human characters and have a different agenda, perhaps even a different morality like my vampires.
The best vampires for me are sexy vampires – partly that’s a “power” thing too, and partly it’s the neck biting J. Then, having lived so long, there’s the attraction of wisdom and all the history they must have witnessed – or even caused! And immortality, of course, which adds to the god-like power again – and in the case of vampire romance, a lover who’ll never die is irrestible.
2. FF:What is your favorite fictional vampire? More specifically, do you think there is a certain vampire novel that is inimitable? (Personally, I think there won’t be another “Interview with the Vampire”)
MT:Well, I’d have to agree with you there J. I think the two vampire novels which have influenced me most are, not surprisingly, Dracula, and Interview with the Vampire. For me Dracula is still a fantastic character: a massive presence, evil, powerful and sexually mesmerizing.
When I was a teenager, I fell in love with Louis from Interview with the Vampire. If I read the latter now for the first time, I might prefer Lestat, but it’s too late – I can’t give up on Louis and his tragedy. Interview was the first vampire book I read told from the vampire’s point of view – it blew me away, and I think it opened the door for the numerous vampire romances out there now. Including mine J.
3. FF:Normally, I ask this of any author who writes books featuring vampires and zombies. Why do you think vampires or zombies even have so much renewed appeal now?
MT:Hmm, I think it’s escapism. A fantastic world full of fantastic beings and exceptional love, is perhaps especially popular in times of difficulty and economic hardship. And then with violent crime increasing, at least in people’s perceptions, whatever the reality of the various statistics, I think there’s a certain charm in imagining a being capable of more effective violence on your behalf, or even an otherwise ordinary human honed to such a degree that he or she can take on whatever evil violence is flung at them, and win.
I can understand the appeal of zombie stories too – saving the world from a terrible plague is obviously heroic – but as romantic leads, zombies give me, personally, more difficulty. I understand that vampires and zombies are both dead, but…  While blood drinking can be described so that is seems sexy, brain eating is just messy!

Thanks to Marie Treanor for the  great answers for Bewitching Book Tour’s help in coordinating this interview!